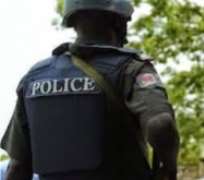 Human history is replete with instances of the people getting fed up with official policies and taking on the government. Monday January 9, 2012 was one of those days when the Nigerian people in anger, decided to shut down the country. The populace succeeded in taking over the towns and cities across the country of over 167 million people, but there were desperate efforts to retake the streets. One of them occurred in Ogba, a suburb of Ikeja, the Lagos State capital.

One of the two busiest and longest streets in the area is Yahaya Abatan. But on this day, like in other parts of Lagos, the street was completely deserted with shops and businesses closed and zero vehicular traffic. On a stretch of this road, youths played football with some spectators on the side line, while a few people gathered beside a newspaper vendor reading newspapers and discussing events in the country.

Suddenly, a police van RRS 101A arrived the scene. The police team was led by Chief Superintendent of Police, Mr. Segun Fabunmi the then Divisional Police Officer (DPO) of Pen Cinema Police Station. Mr. Fabunmi with a 28-year experience in the police, ordered the youths to stop playing football and disperse. They took it for a joke since they were not demonstrating or hindering anybody from moving about. One of the spectators watching the match, 28-year old Demola Abiodun Aderintola Daramola, a tailor and commercial motorcycle rider jokingly told the police officer to leave the youths alone.

The policemen seized him while other youths started moving away. Phone cameras and video recording by some of the witnesses showed Daramola, wearing a green t-shirt over blue jeans sitting on the street with his two hands up in the air in apparent supplication while three armed policemen; two in the uniform of the riot police, and the third, wearing bullet proof vest, were beating him. At a point, the DPO shot Daramola, execution style and turned his gun on other citizens he could find. Other policemen joined their boss and began shooting indiscriminately at the fleeing youths.

Mr. Daramola, a resident of 6, Aderinton Street, Ogba who had been shot in the crotch, got up and ran, but he had already lost a lot of blood and only managed to get to the nearby Abeokuta Street, where he sat down, and apparently died.

Meanwhile the DPO and his men chased the other Nigerians like hunters after rabbits, downing four additional persons. Mr Christian Amadi had one of his right hand fingers torn off by a bullet. Twenty three-year old Samuel Egbujor, a student had gone to read newspapers at the newsstand when the harbingers of death arrived. Egbujor who was shot in the thigh later said on his sick bed “ I did not even know I had been hit. I simply heard the shot and realized that I felt a sharp pain in my thigh. The only thing I was concerned about was to run. But I realized that my thigh was bloody. Nobody was protesting when we heard the shot.”

Mr. Monday Joy, 20 was distributing protest handbills when he saw a policeman shooting people. He began to run, but was felled by a bullet. MR ABUBAKAR ALIMI, A BUSINESSMAN WAS WATCHING THE YOUTHS PLAY FOOTBALL WHEN THE SHOOTING STARTED, HE BOLTED FROM THE SCENE LIKE USAIN BOLT IN A 100 METRES OLYMPIC GOLD MEDAL RACE, BUT A BULLET WAS FASTER, IT CUT HIM DOWN.

With a culture of hospitals refusing to treat persons having gunshot wounds unless there is a certified Police Report, residents spent time persuading the police to issue reports for the victims, then rushed them to the Ifako Ijaiye General Hospital which despite the Police Report, refused to treat the victims. Finally, a private medical facility, the County Hospital admitted and treated Egbujor, Joy and Alimi.

The police initially claimed that the youths were engaged in a violent protest and that Mr. Daramola tried to dispossess the DPO of his gun leaving the latter with no choice but to shoot the victim. But within hours, and apparently to douse rising anger, the police authorities officially condemned the police team that carried out the shooting and arrested DPO Fabunmi.

The Spokesperson of the Lagos State Police Command, Mr. Samuel Jinadu told the media “When the Commissioner of Police, Mr. Yakubu Alkali, heard of the incident, he ordered that the DPO should be arrested. Right now, he has been arrested and handed over to the State Criminal Investigative Department (SCID) for discreet investigation. When the investigation is concluded, the report will be made known to the public.”

Commissioner of Police, Alkali while handing over Mr. Fabunmi to detectives in the presence of some journalists told him “You are on your own. I was not there when you fired the shot. You and God know the truth; but the law must take its course. So I am handing you over to the SCID for interrogation”

The populace was used to impunity by security forces. The decision by the police to distance itself from its agent could have been due to the balance of power on the streets on that day.

On May 15, 2012, the Lagos State Government arraigned Mr. Fabunmi on a seven-count charge of murder, attempted murder and causing grievous bodily harm. Finally on Monday, December 14, 2015, three years after the murder, the dismissed cop stood before Justice Olabisi Akinlade who in sentencing Fabunmi to ten years imprisonment for the lesser crime of manslaughter, and five years for injuring others, said “He definitely knew that shooting an AK47 can cause grievous bodily harm to anyone the bullet hit. The fact that he was on a lawful duty did not mean that he should have shot his gun sporadically.”

The living got justice, the populace saw justice done. But Daramola's family is out there in need of assistance. That is the justice we can render Daramola.