The Call For Removal Of Fuel Subsidy: Another Misadventure Of Senator Bola Ahmed Tinubu & All Progressives Congress (apc) 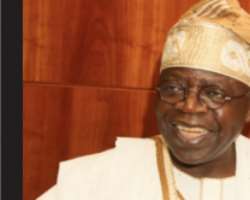 The recent insistence by Senator Bola Ahmed Tinubu that President Muhamodu Buhari must remove fuel subsidy come January 2016 is quite unfortunate in many respects, it is another misadventure of National Leader of APC and his party.

It smacks of lack of sense of history, betrayal of the common people and utter disservice to the memory of Late Professor Bala Usman the 10th anniversary of whose death Senator Tinubu chose to make such flagrant insensitive postulation.

To begin with, there is a lot of question mark on the choice of a Tinubu for such assignment as doing justice to the the legacies of Comrade Bala Usman. One need not be too grounded in the political history of Nigeria to recognize that there was a clearcut difference between the revolutionary, socialist ideas of Bala Usman and Tinubu’s fair weather eclectic , pseudo-capitalist principles which unavoidably pander to the needs of neoliberalism.

Bala Usman was a teacher of the youth, students, peasants and the working class. He stood for fundamental social transformation in favour of the downtrodden as against the greed and graft which form the bedrock of Nigeria’s neocolonial ruling class ideology. Throughout the 80s and until he passed on, Bala Usman was a vehement anti-fuel subsidy removal agitator and organizer. He was very clear in his enunciation that Nigeria as an oil producing country could not sell petroleum products to Nigerians at the so-called global market price. His political economic analyses to substantiate this, delivered at various lectures, conferences and seminars, spanning decades are there in the achieves for anyone who cares to see.

It is therefore rather preposterous to make such anti-people proclamation of undying love for fuel subsidy on Bala Usman’s anniversary. If at all Senator Tinubu never had encounter with Bala Usman or his mountains of intellectual production, thoroughness demands that when asked to speak on such occasion he should have really done his homework, and as questions. After all, there is no harm is asking when a man finds himself in a new terrain where the road signs are strange to him.

But then it would appear that Senator Tinubu was on another of several missios to hoodwink the masses, using a platform that he has no moral claim to but only politically found expedient in his mission to fulfill the by now too familiar stock-in-trade of his party. Doublespeak, backstabbing and swindling of the masses by way of answering “Progressive” and flying the “Change” kite while being at the beck and call of international capital and local compador bourgeoisie is the name of the new strange political game in town, and Jagaba ‘n Borgu seems not to be prepared to be outdone by any contender, being the de facto leader of the change motley.

Not content with chaperoning the mass of the people into the One-Chance change bus, Senator Bola Tinubu persistently goads on the government of President Muhamodu Buhari to continue to shortchange the working class and the rest of the masses by any means and at all times. The leader of APC, whose then Action Congress Of Nigeria (ACN) took the former President Goodluck Jonathan’s government to the cleaners and openly supported protest against fuel subsidy removal in January 2012, should realize that Nigerians are watching and already asking questions. What his party promised was not retrenchment, downward review of minimum wage, tightening of belt, half-hearted and selective anti-corruption crusade and a weak currency. Change meant in the people’s perspective security, job opportunities, living wages and general economic prosperity. What Senator Bola Ahmed Tinubu proposed on the platform of one of the foremost leaders of the Talakawas is a recipe for economic epilepsy and political eruptions.

The arguments put forward to back such dastardly assault on the interest of the working people are as puerile as they are malicious. Although nothing better could have come from an oil magnate and exploiter of labour, it would have been expected that more convincing demagoguery was wrought. The arguments are pedestrian, lack depth and too routine to convince anyone in this digital age. For instance, it sounds rather lame an argument to say money saved from subsidy will be used for infrastructural development, or to present the appearance that subsidy is an unusual phenomenon. The fact remains that governments all over the world subsidise one thing or the other. In Nigeria it is only fuel government claims to subsidise. Of course, in the real sense, what it translates to and why it is being opposed is that subsidy removal is an euphemism for increased fuel price in the Nigerian political economy. So what Senator Tinubu tacitly proposed is that the poor masses must be made to pay more for fuel from their already lean pockets in order to fatten the pockets of capitalists like himself and his friends. That is the simple meaning of good business climate to them.

Sincerely, the government of President Buhari needs to be told to stop running from pillar to post and leaving the the country afloat like a rudderless boat in the middle of a stormy sea. The solution to the present socio-economic quagmire are already there in black and white. The government needs to swallow its pride and revisit the 2014 National Conference report, in which most of the issues that confront him today (economic, political and even security) are clearly analyzed and solutions proffered. The more the government shies away from this the more things will continue to fall apart. The government needs to diversify the economy, restructure the country, devolve power and operate proper fiscal federalism, while domesticating and making justiciable all international conventions of human and people’s rights to which Nigeria is signatory. That is the only way the government can make real and permanent change.

On the part of the people, the real nationalists, progressives, democrats and humanists need to close ranks irrespective of political party and other difference, to forge a common platform against the neoliberal assault being championed by the likes of Senator Bola Ahmed Tinubu. A people united can never be defeated

***Olukayode Ajulo is a Lawyer, Unionist and Civil Rights Activist. He is the Principal Partner, Kayode Ajulo & Co. Castle of Law, Founder, Egalitarian Mission for Africa. He was the Chairman, Ondo State Radio-vision Corporation and the Immediate Past National Secretary of Labour Party.