Obama delivers his strongest rebuke yet of Donald Trump 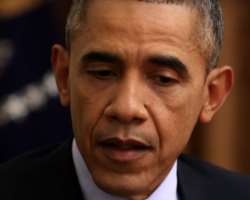 Barack Obama.
US President Barack Obama, in an interview that aired on Monday, delivered perhaps his strongest rebuke yet of Donald Trump, the Republican front-runner to succeed him in the Oval Office.

In an interview with National Public Radio , Obama accused Trump of preying on the fears and anxiety of the blue-collar, working-class men who have fueled his surge to the top of the GOP field.

Obama told NPR host Steve Inskeep that because of “economic stresses,” like stagnating wages and incomes, working-class men “ have had a lot of trouble in this new economy.”

“They are no longer getting the same bargain that they got when they were going to a factory and able to support their families on a single paycheck,” Obama said.

He continued: “You combine those things and it means that there is going to be potential anger, frustration, fear. Some of it justified but just misdirected. I think somebody like Mr. Trump is taking advantage of that. That’s what he’s exploiting during the course of his campaign.”

It was Obama’s first comment on Trump since the real-estate mogul offered a plan in the San Bernardino attack’s aftermath to temporarily bar Muslims from entering the US , which has garnered controversy on the campaign trail ever since.

In the interview, Obama acknowledged that there has been some “legitimate criticism” of his administration’s strategy against the terrorist group ISIS — aka ISIL and the Islamic State — which has been linked to the San Bernardino attack. But he insisted that his strategy was working.

“Now on our side, I think that there is a legitimate criticism of what I’ve been doing and our administration has been doing in the sense that we haven’t, you know, on a regular basis I think described all the work that we’ve been doing for more than a year now to defeat ISIL,” Obama said.

He added: “And so part of our goal here is to make sure that people are informed about all the actions that we’re taking. But one of the interesting things that you’ve seen evolve over the last several weeks, including in the debates that are taking place between the Republican candidates, is that those who are critics of our administration response, or the military, the intelligence response that we are currently mounting, when you ask them, well, what would you do instead, they don’t have an answer.”

Though Obama had yet to weigh in, his top spokesman immediately rebuked Trump after his proposal of the plan.

“The Trump campaign for months now has had a dustbin-of-history-like quality to it, from the vacuous sloganeering to the outright lies to even the fake hair. The whole carnival-barker routine that we’ve seen for some time now,” White House Press Secretary Josh Earnest said.