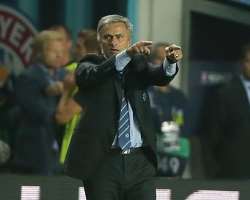 Jose Mourinho has agreed a five-year deal to become the new Manchester United boss, according to stunning claims in Spain.

Fichajes even state that he could have signed the contract already.

They write: 'Several media and journalists close to Portuguese Jose Mourinho say the technician has agreed a deal with Manchester United for the next five years, the news is not yet official.'

The report was vague and did not specify when Mourinho's reign could start. Fichajes  predomi-nantly report on Spanish transfer news to varying degrees of success.

But  Starsport  knows for sure that Van Gaal has TWO games left to save his job at  United.

Saturday's shock 2-1 defeat to Norwich at Old Trafford has left the Dutchman fighting for survival.

Mourinho is desperate to succeed him after being sacked by Chelsea last week while Pep Guardiola yesterday sparked a scramble for his signature after Bayern Munich confirmed he will quit the German giants in the summer.

Although Guardiola is still favourite to join Manchester City, his availability - along with Mourinho's - has handed United two big-name options and means Van Gaal cannot afford another slip up.

And Starsport understands that unless there is a drastic improvement,  United's owners will take action.

That drastic action could now be appointing the Special One.

United were booed off after their third straight defeat sent them tumbling out of the top four.

And despite Van Gaal claiming his players are still behind him he conceded his job is now on the line. Agency report