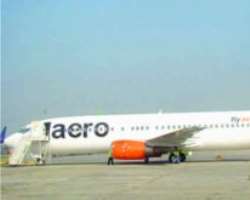 Lee Foon, who disclosed this while briefing aviation correspondents on Monday, on what happened at Bauchi Airport at the weekend, said the charter was booked by a group of young people, who were to attend a wedding party and that the groom was also on board.

The accountable manager explained that on December 18, 2015, Peter Omata, the airline's head of ground operations, confirmed the handling of the flight through Abubakar, the airport manager of Bauchi, and that he also confirmed on many occasions the availability of the air stairs and cost.

He further explained that prior to leaving Abuja, the flight dispatcher contacted the airport manager to advise that the aircraft was taxing out and he confirmed that they were ready to receive the flight.

According to him, “At 10:42am the aircraft touched down on Runway 35 at the Sir Abubakar Tafawa Balewa International Airport. The controller advised the crew that due the absence of marshallers and no ramp officials of any sort that parking would be at their own discretion.”

“The Captain reported that he informed the passengers of the situation as they were beginning to get agitated. What was not known to the crew at the beginning of the flight was that the groom of the wedding was on board the flight. The wedding was to be started in another 20 minutes.”

The accountable manager stated that at 10:57am the crew called the controller to enquire why there was no one to position the stairs to the aircraft and that he was told that the stairs had “just broken down” and that the fire services were making provisions to sort it out.

He said that after waiting for another five to seven minutes the passengers became furious as they were now getting very late for the wedding ceremony, adding that at that point the Captain went to the cabin and explained to them that he might have to take them back to Abuja as they cannot disembark due lack of stairs.

According to him, “The group insisted that he cannot keep them on board the aircraft and he considered that their anger was becoming potentially threatening for the crew to take them back to Abuja. The alternative, which the fire services provided, was a ladder the passengers took as an option and on their own free will decided to use the ladder to disembark against the wishes of the Captain and crew. The Captain allowed this procedure in order to reduce what he thought was a volatile situation.”

Meanwhile, the accountable manager said an investigation into the event had begun and that the results could lead to changes in the airline's operational procedures.

The findings, he said, would become a part of the airline training and Crew Resource Management (CRM) re-currency training exercises.

The Aero boss stated that any future charters to destinations that were not areas of scheduled commercial flight operations must have at least one permanent ground handling company on ground before we would consider.

“We will continue to operate our aircraft safely and within the guidelines of the law, and the company must continue to ensure the safety and security of our crews and passengers,” he said