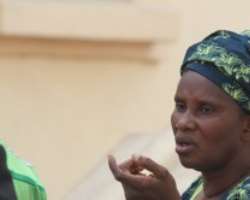 Oluronke, a former registrar to Justice Joseph Oyewole, was prosecuted on a two- count charge of conspiracy and obtaining money under false pretence, preferred against her by the Economic and Financial Crimes Commission, EFCC. She was initially charged alongside a Lagos socialite, Fred Ajudua before Justice Oluwatoyin Ipaye for defrauding a former Chief of Army Staff, General Ishaya Bamaiyi (rtd), the sum of $8.4Million (Eight Million, Four Hundred Thousand United States Dollars), while he was being detained in Kirikiri Maximum Prison over his trial for the attempted murder of the late publisher of Guardian Newspapers, Chief Alex Ibru.

Specifically Oluronke aided Ajudua to defraud Bamaiyi of the said sum under the false pretence that it was a part payment for the professional fees purportedly charged by Chief Afe Babalola (SAN) to handle his case, while both of them were being remanded at Kirikiri Maximum Prison between November 2004 and June 2005.

However, Oluronke opted for a separate trial and was arraigned before Justice Lawal Akapo on April 20, 2015. Delivering his judgment Monday, Justice Lawal Akakpo held that some incriminating documents linking her with Ajudua were found in Oluronke’s house, when a house search was conducted there and that there was no doubt that there was conspiracy between her and Ajudua in the matter.

“I hold that the accused visited Kirikiri prison on three occasions; with this, there is no doubt on the intention to defraud”, he said.

THEWILL recalls that the EFCC had insisted that Oluronke was an accomplice in the case and called six witnesses. One of the witnesses was Bamaiyi who told the court that Oluronke actually came to see him several times in prison.

But the turning point in the trial was when the Commission presented evidence of polygraph test administered on the convict by polygraph experts from the Commission’s Internal Affairs Department. It was the first time polygraph evidence would be admitted in criminal trial in Nigeria.