PDP to security agencies: Be alert, Rivers APC is dispossessing members pubic of their PVCs 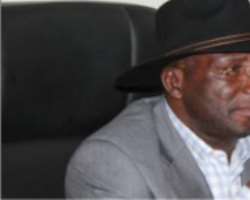 The All Progressives Congress is unlawfully dispossessing members of the public of their Permanent Voters Cards (PVCs), under the guise of conducting the party's membership registration in the State, the Peoples Democratic Party (PDP) in Rivers Statehas alleged..

The State PDP chairman, Felix Obuah, in a statement by his Special Adviser on Media and Publicity, Jerry Needam, caaled the attention of security agencies to the development.

According to the  party, it has confirmed that leaders and members of the APC are procuring PVCs for N5,000 per card, and in some cases forcibly collecting them from  the electorate across the State, particularly in the Ogoni LGAs, ONELGA, Port Harcourt, Obio-Akpor, Etche, Kalabari, Ahoada East, Ahoada West, Opobo/Nkoro, Andoni, Oyigbo.

The statement said, “The PDP says the political development is of much concern because of its criminal inclination and as it infringes on the fundamental rights of the original owners of the PVCs, who have been stripped of the rights to exercise their franchise and whose personal identities have also been impersonated, undermined, endangered and abused.

“We are also made to believe that the act of buying PVCs with such amount is an exposition of the APC taking undue advantage of the poverty and the hard economic situation that has ravaged the nation following the insensitivity and apparently lack of vision and focus by the APC administration under President Buhari.”

The PDP said the actions of the APC negate the very essence for which the Independent National Electoral Commission (INEC) conceived and produced the cards, which contain essential personal details of the individuals and original owners of the respective PVCs.  It added that rather than represent the change which APC professed and on which it rode to victory at the centre, describing the development as retrogressive and unpatriotic, and portending grave danger to the survival of the nation's democratic system.

“While calling on Rivers people to stop releasing their PVCs to fraudulent members and agents of the APC, no matter the persuasion, inducement, intimidation and threat, the PDP urges the various community leaders to check the trend and not to allow their communities to be used in perpetrating electoral fraud by the APC,” the statement said.

It appealed to the police and other security agencies to be unbiased, and to be more proactive in their responsibilities in checking all forms of crime, including the electoral felony which it says characterizes the ongoing APC registration exercise in the State.