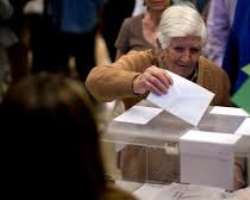 Spain's ruling People's Party (PP) won 123 seats in the national parliament, but lost an absolute majority to an expected left-wing block including the Socialist Party (90 seats) and anti-austerity Podemos (42/69 seats). PP said it will try to form a government.

Since Podemos is affiliated with a number of regional electoral coalitions, which have different names in different regions, alternative counts give the number of seats they have secured as 69. This includes 12 seats from Catalonian En ComÃº Podem, 6 seats from Galician En Marea, and 9 more seats from the CompromÃ­s-Podemos-Ã‰s el moment coalition in Valencia.

The leader of Podemos party Pablo Iglesias told his supporters that this is a'historic' day for Spain, as it ushers in a new political era.

'Today is a historic day for Spain… We are starting a new political era in our country,' Iglesias said. 'Spain is not going to be the same anymore.'

Prime Minster Mariano Rajoy's conservative Partido Popular (PP) party still took the largest share of the votes, though it will lose its parliamentary majority when the results of its left-wing rivals are combined.

Click here for details
“PP is the strongest force and the one chosen by the Spanish people,” said its spokesman at a press conference, as the exit polls were announced. The party captured 44 percent of the vote in the last election in 2011.

“The two-party political system is over and we are entering a new era in our country,” said Podemos’s deputy Inigo Errejon.

A total of 176 seats are necessary to win a majority in Spain's 350-seat chamber of deputies, meaning that PP, predicted to have 124 deputies at most, will have to strike a deal with one of the runners-up to remain in power.

It should be the party with the most seats - the People's Party - that should try to form the government first, the leader of the Socialist Party Pedro Sanchez said. He added that people have voted 'for the left and for change.'

Spain's acting prime minister, Mariano Rajoy, told his supporters in Madrid that he will try to form a government, adding that it will not be an easy task as none of the parties had received a clear majority.

Both Cuidadanos and Podemos have painted themselves as protest parties, unwilling to be a part of the old political order, with its baggage of corruption and economic hardship. Spanish wages have still not recovered to 2008 levels despite years of austerity implemented by both the Socialists and PP. Unemployment is at 21.6 percent – gradually falling, but still the second-highest in the EU after Greece.

It is possible that Podemos and the Socialists will unite to form a left-wing coalition, though Rajoy said he would attempt to prevent this at all costs.

There are no specific rules stipulating how or when the new government must be sworn into office, and deputies could call for a new vote, if no consensus is reached.

Since Spain's transition to democracy, following General Franco's death in 1975, there has never been a coalition government. Without outright majorities, biggest parties have relied on support from minor factions on individual votes