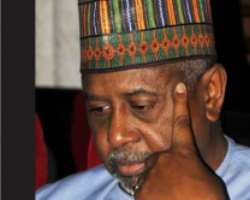 Dasuki alongside a former Sokoto state governor, Attahiru Bafarawa; former Minister of State for Finance, Bashir Yuguda; Bafarawa's son: Shuaibu Salisu, and Sagir, were granted bail in the sum of N250m each.

The judge had asked the accused persons to provide two sureties in like sum and also deposit their international passports at the court.

He explained before granting the bail that “bail was not about setting anybody free,” stressing that “the primary essence of bail is to ensure that the accused person attends trial”.

Affem then ruled that the offences the accused persons were alleged to have committed were bailable and adjourned the case to February 2 and February 3, 2016.

It would be recalled that the Economic and Financial Crimes Commission, EFCC, had last Wednesday arraigned the accused on a 22-count charge of conspiracy, bribery, abuse of office and criminal breach of trust to the tune of N28 billion. They all pleaded not guilty to the charges.