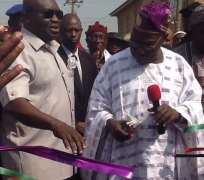 The former President of the country, Chief Olusegun Obasanjo appreciates Governor Ikpeazu's concern for the development of Abia State and made it clear that he sees in him, signs of greatness and a great future ahead of him.

In his remark, Governor Ikpeazu pledged to continue to that which will attract him commendation of people as well as to do more in serving the good of Abia State.