You can't represent Lagos and Kogi at the same time, PDP tells Faleke 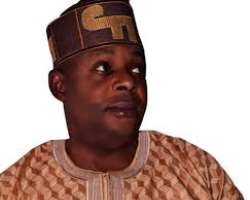 The Lagos State chapter of the Peoples Democratic Party has asked the lawmaker representing Ikeja federal constituency of Lagos State, Mr. James Faleke, who is also the deputy governor-elect in Kogi State to make up his mind on which state he actually represents.

The PDP said this in a statement by its chairman, Capt. Tunji Shelle (retd.), on Sunday.

The party said Faleke, who has been battling for an executive position in Kogi State, had short-changed the people of Ikeja who voted for him on March 28, 2015.

Faleke was the running mate of the late Kogi governorship candidate of the All Progressives Congress, Abubakar Audu. Following Audu's death, however, Mr. Yahaya Bello was picked as Audu's replacement but Faleke maintains that he is the rightful successor to Audu and is in a legal battle with his party over the matter.

The PDP therefore accused Faleke, the APC and the Independent National Electoral Commission of desperation, political immorality and gross violation of the spirit of the Electoral Law.

Click here for details
The party called on the House of Representatives to exhibit non-partisanship in the matter by making public its unequivocal stance on the proprietary or otherwise of Faleke's continued membership of the House even after transferring his voter details to Kogi State.

The PDP boss described the present status of Faleke in the House as that of a 'usurper who should no longer be fit and proper to be called an honourable member.'

The party, therefore, gave Faleke seven days to declare his present place of voter registration and for INEC to clear the air on the appropriateness of Faleke inter-changing polling units within a period of less than six months.

'If the demand is not met within the period of this ultimatum, we shall use all means permitted and effective to reclaim the seat for Lagos State,' the party said.

Shelle added, 'Faleke should not continue to represent the Ikeja constituency because he presently has his voting unit relocated to Kogi State. This is open assault to decent democracy and ridicules the nation before the international community.'

In his reaction, however, Faleke urged the PDP chairman to mind his business. The lawmaker said if the party was dissatisfied with the status quo, it should take him to court instead of making empty threats.

Faleke said the PDP had no regard for its own constitution and wondered what moral right Shelle had to give him a seven-day ultimatum.

He said, 'Shelle must have read the constitution upside down by reading immorality to what I have done. He should consult experts to have a better understanding of the statute book.

'Why should he give me a seven-day ultimatum? If he is so serious about what he is saying, he should go to court tomorrow. This is a constitutional democracy. The law is there to be tested.'