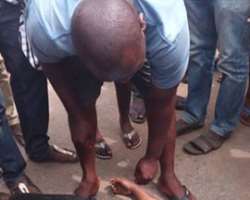 The above subject matter refers.
The Civil Liberties Organisation (CLO) Anambra State Branch is dismayed over the continued slide to bloodletting by the security agents working in the state since the commencement of peaceful protest over the continued detention of the leader of Independent People of Biafra (IPOB).

The Constitution of the Federal Republic of Nigeria places you as the Chief Security Officer of the state while you also swore to uphold the safety and welfare of the people as your topmost priority.

Unfortunately, recent events in the state where those armed with instruments of coercion mow down innocent citizens in cold blood in the name of controlling violent protests while their victims are unarmed and defenceless calls to question whether civility taken flight in the state.

Also, Your Excellency’s dangerous silence after the first reported shooting of unarmed members of IPOB on Sunday 30th August 2015 after their peaceful assembly that left at least 3 people dead was quite condemnable. But painful as the first incident could be, the further attacks and killings of indigenous and resident people mostly youths in Anambra while your administration seemingly panders to the wishes of the President Buhari led Federal government of Nigeria in accomplishing its seeming hatred of Ndigbo is a serious indictment on your person and administration.

Your Excellency may be aware that subsequent shootings and attack on the unarmed protesters from August 30 2015 till December 17 has led to the painful death of at least 24 citizens which you swore to protect and also left at least 50 critically injured, some with permanent disabilities.

While the we in the South East Coalition of Human Rights Organizations; comprising the International Society for Civil Liberties & the Rule of Law (Intersociety), Anambra State Branch of the Civil Liberties Organization (CLO), the Center for Human Rights & Peace Advocacy (CHRPA), Human Rights Club(HRC) (a project of LRRDC), Southeast Good Governance Forum (SGGF), Forum for Equity, Justice & Defense of Human Rights (FEJDHR), Society Advocacy Watch Project (SPAW), Anambra Human Rights Forum (AHRF), the International Solidarity for Peace & Human Rights Initiative (INTERSOLIDARITY) and the Street Law Africa (LawAfrica) have consistently condemned the continued detention of the leader of IPOB, Nnamdi kanu, calling for his unconditional release and the serious human rights violations continuously meted on the peaceful protesters, we were alarmed on the government public announcement warning any group against assembling under any guise and also giving/ arming the security agencies with the might to deal with anybody found breaking the law.

We make bold to say Your Excellency, that it was the public service announcement with your imprimatur that emboldened, propelled and fuelled the ease with which the soldiers opened fire on the jubilating Anambrarians who were sent to their early graves unprepared on the 17th of December 2015.

More heartbreaking was the continued resort to a climate of impunity by the same military or Joint Task Force set up by your administration following the reported invasion of Multicare Hospital, Omagba , Onitsha and the forceful taking away of the critically injured victims to an unknown destination.

While we expected your administration to take immediate and urgent steps to address the anomalies, your public broadcast where you said in your own words that, “the death of these young men and women in these protests is a sad chapter in the history of peaceful agitations in Nigeria. It is regrettable but we must accept it as some of the sacrifices we must make in Nigeria’s march to a stronger and more united country” to say the least is another unguarded utterance from the State Chief Executive intended to cause more harm than to heal or placate an already worse situation.

Your Excellency may also be aware that men of Nigeria Navy, Ogbaru Command domiciled at Iyiowa Odekpe with special emphasis on the squad stationed at Uga Junction by Mobil Filling Station, Bridge Head have caused untold harm to the image of your administration. From abdicating from their core responsibilities, the squad has taken special delight in brutalizing innocent citizens. Some are beaten with gun butts and horse whips while some others are made to roll on the ground or drink gutter flood sometimes on the flimsy reason of crossing the expressway without taking the pedestrian bridge.

Another fallout from Your Excellency’s broadcast is the fact that the bulk of the policemen drafted into the state in the wake of the provoked violent protest coupled with those already domiciled here have all gone hare wire.

Most residents going about their normal businesses are routinely arrested and labeled MASSOB/IPOB members and clamped into detention. Freedom is often regained after the exchange of cash in high digits. Motorcycle riders are summarily arrested based on your Okada restriction law and are made to pay N5000 which expressly enters into the private pockets of the arresting police officer/ team. The most annoying part of it is that most of the bike riders are arrested while they are pushing their bike to cross over to the non restricted routes or when they get to a road junction switching over to the other side.

Your Excellency, the import of this letter is to remind you that posterity is recording your actions and inactions both in this unfolding dark period of killings in Anambra and in other aspects of your administration. A certain Pontius Pilate washed his hands during the trial of Jesus Christ by the Jews but never took any decisive action to save Jesus from their hands because he wanted to please Ceaser. Today and even centuries to come, his name will always crop up for his action and inactions.

Your Excellency, may also see the position of our National President, Barr Comrade Uche Wisdom Durueke in the wake of one of our letters over the killing and maiming of non armed protesters in Anambra . He said: “I maintain that protest is an important democratic component of freedom of expression and freedom to assemble. Protest is an inalienable right of the human person. It starts from the womb. Babies kick inside the womb thereby expressing the desire to come out: inherent sense of liberty. When babies are delivered, they come out crying. This is as a result of the new environment. This is life!

“Apart from the issue of human right, when the State kills any protester for a cause, the cause gains more adherents who find the justification of the cause in the Killing. The reason is usually and simply this: if they are telling lies, why is the government killing them? The agitations across the country will naturally calm, if we enthrone equity in governance - that's providing for the basic needs of the citizens and giving the citizens the confidence and pride of being citizens of Nigeria.

“I always say this: if any man or woman wishes bright future, he or she must take bright positions and take bright actions. It applies to nations too”

Our position in the South East Human Rights Coalition in one of our recent public statements still suffices: “Constitutional & Global realities of the Southeast (Biafran) self determination agitation: It is our firm stand that rights of the people to existence, development and self determination; irrespective of their race, colour, religion, ethnicity or class, are internationally and regionally preserved and protected provided they do not use or advocate violence. Though the success of using violence to advocate for and achieve these rights is determined by the doctrine of necessity (i.e. Eritrea from Ethiopia in 1993, South Sudan from Sudan in 2011, Slovenia, Croatia, Bosnia & Herzegovinian, Macedonia, Serbia and Montenegro from Yugoslavia in 1991/2), but violence of any kind is abhorred and prohibited locally, regionally and internationally. Our collective sympathy for the assertion of rights to existence, development and self determination by the people or race under reference is built on two strong premises of use of non violence and the fact that the Nigerian Constitution, regional and international treaties recognize and protect the rights in question.

“Rights to life, dignity of human person, personal liberty, freedom of expression, movement, peaceful assembly and association and freedom from discrimination are expressly provided in Sections 33, 34, 35, 36, 40, 41 and 42 of the 1999 Constitution of the Federal Republic of Nigeria. Rights to existence, development and self determination are also provided in Article 20, etc of the African Charter on Human & Peoples Rights of 1981; ratified and domesticated by Nigeria in 1983. The right to self determination is also provided in Article 1 of the International Covenant on Civil & Political Rights of 1976, signed and ratified by Nigeria in 1993. It is also empirically established that countries in the world have periodically reviewed their concept of togetherness or separation and of the two major available approaches: peaceful and violent means; peaceful means remain the international best practices; which is why we constitutionally sympathize with the Southeast Nigeria’s self determination agitators owing to their non violent approaches”

OUR CALLS AND DEMANDS:
Immediate setting up of an unbiased commission of enquiry into the killings and injuries inflicted on the good people of Anambra State between August and December 2015.

The State Government to tender an unreserved apology on behalf of the security agents for the killings and maiming perpetrated in the state.

The release of the bodies of the murdered victims to the families and the full disclosure of the identities and whereabouts of the injured taken away from the hospital where they are receiving treatment. The government should also bear the full responsibilities for the welfare of their respective families by ensuring that adequate compensation is paid.

The immediate convening of joint security council meeting in the state with a strong and committed resolution that the security agents must be civil and conciliatory in their operations in the state henceforth most especially as it concerns the general public and unarmed civilians.

The resolution to send Naval men away from the Uga junction and restrict the operations of the Navy in Anambra to the waterways.

The relaxing of the restriction of Okada/ motorcycle operations in the state until a better formulated policy framework with inputs from relevant stakeholders is adopted.

That the security agents mostly the police are cautioned seriously on their mode of operations in the state most especially this yuletide season. Their operations must ensure fluidity and unhindered movement instead of gridlock and shutdown in the name of looking for criminals.

The security and welfare of the people must be at the forefront of any government action henceforth.

The Chairman, Christian Association of Nigeria (CAN)