Dasukigate: Punch Withdraws From NPAN Over Alleged Receipt Of N120m By Members 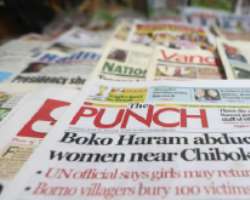 SAN FRANCISCO, December 19, (THEWILL) – Following the alleged distribution of N120m from funds meant for arms procurement to some newspaper houses as compensation for the losses they incurred in June 2014 when armed soldiers seized newspapers and newspaper distribution vans, Punch Nigeria Limited has suspended its membership of the Newspaper Proprietors' Association of Nigeria, NPAN.

The parent company of the PUNCH titles communicated its decision to the NPAN in a letter dated Thursday, December 17 and signed by its chairman, Wale Aboderin, stressing that the withdrawal of membership will subsist until critical issues it raised over the matter are addressed.

Investigations into how $2.1billion allegedly meant for arms procurement was spent had revealed that the publisher of Thisday Newspaper, Nduka Obaigbena, collected N120 Million from the former NSA on behalf of 12 newspapers whose circulation were disrupted by the military in June 2014. He also claimed that the sum was also meant to compensate publications whose offices were attacked by Boko Haram insurgents.

But Punch, in its letter, noted that: “After a careful review of recent, and still unfolding, developments, Punch Nigeria Limited is suspending its membership of the Newspaper Proprietors' Association of Nigeria until further notice. This suspension takes effect immediately.

“The public will recall the criminal charges levelled against a former National Security Adviser, Sambo Dasuki, and several other alleged accomplices.”

“These charges border on the diversion of public funds, totalling $2.1 billion, allocated for the purchase of arms to prosecute the war against terrorism.”

“The revelations indicate that the sum of N120 million was disbursed in murky circumstances to some member-companies of NPAN, ostensibly as compensation for the losses they incurred in June 2014 when armed soldiers seized newspapers and newspaper distribution vans.”

“The source of this money and the manner of its receipt, allegedly through a company called General Hydrocarbons, which is unknown to NPAN, have raised public concerns about the integrity of the press in Nigeria.”

“The unfolding scandal has equally cast a shadow on the reputation of the mass media,” the paper said.

Punch, which said it had always held that state-sponsored attacks against the media should be challenged in the open, boldly and vigorously, cited an example of the redress it sought over similar circumstance thus:

“It was for this reason that we instituted an action against the federal government at the Federal High Court, Lagos, on June 13, 1994.”

“Among other reliefs, the company sought compensation for the June 11, 1994 invasion of our premises by a combined team of policemen and State Security Service agents who shut down our operations and detained our staff.”

“Suffice to say that the case is currently at the Supreme Court where the federal government is seeking to overturn the judgment of Justice T.A. Odunowo, who declared the invasion illegal and awarded PUNCH the sum of N25m in damages,” the company said.

The newspaper continued that it had for long held a position that the relationship between an independent press association and the government should be properly defined to preserve, at all times, the independence of the press and the sacred duty of the mass media as the watchdog of society.

“This informed our decision to promptly refuse to file any backdoor claim for compensation for the losses we incurred during the military assault of June 2014.”

“Our readers trust their newspaper and believe that our editorial content is not influenced by pecuniary, political or personal interests.”

“PUNCH remains committed to the vision of its founding fathers and the best traditions of a free press.”

“We believe in an independent and unfettered mass media, trusted by the public and all stakeholders.”

“We have sustained losses, suffered closures and endured privations in the past for our beliefs.”

“We have remained, and will remain, steadfast in the defence of the ideals of responsible journalism; hence, our decision.”

“We reiterate the need to rebuild and refocus the NPAN as a vibrant, independent business association and pressure group, funded only by its member-organisations.”

“We will ONLY reconsider our withdrawal from NPAN when the critical issues which we, and other concerned stakeholders, have raised are addressed,” the paper said.