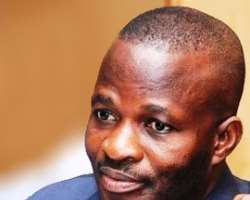 An Enugu State High Court presided over by Justice R. O. Odugu,yesterday,nullified the  impeachment of the former Deputy Governor of Enugu State, Mr. Sunday Onyebuchi and ordered the restoration of all his rights and benefits from the time of his removal up to the period his tenure elapsed.

The court in a judgement that lasted for over an hour, quashed what was popularly dubbed, 'Enugu Chicken Impeachment' that generated public outrage last year. Onyebuchi was impeached on August 26, last year by the immediate past State House of Assembly following the recommendation of the seven-man impeachment panel set up by the state Chief Judge, Justice Innocent Umezulike, which investigated allegations of gross misconduct leveled against him by then Governor Sullivan Chime.

His impeachment from office led to the appointment of Mr. Ifeanyi Nwoye, who served as deputy governor from August last   year to May 29, this year. According to the then State Assembly led by the Speaker, Eugene Odoh, the former Deputy Governor was removed based on allegation of gross misconduct arising from rearing chicken in his official residence and alleged refusal to represent his former boss at two official functions within and outside Enugu.

Justice Odugu, who granted all the reliefs sought by the former Deputy Governor, said that both the legislators and Nwoye, whom the court described as the beneficiary of the illegality neither appeared to defend themselves nor sent legal representation throughout the trial of the case.

He agreed with the submissions by the plaintiff's counsel, Chris Aghanwa, that the impeachment did not comply with the provision of section 188 of the amended 1999 constitution, declaring that the rearing of poultry did not in any way constitute gross misconduct as envisaged by the constitution.

The former Deputy Governor had approached the court to challenge his impeachment from office based on allegation of gross misconduct, urging the court to restore him to office as well as order payment of his benefits if the matter was not concluded before the end of his tenure in office.

He had also asked the court to declare as unconstitutional his removal and  his replacement by Nwoye.  Ruling on the matter, Justice Odugu stated that while the trial lasted, all the defendant did not respond to the various summons served on them just as all the submissions made by the plaintiff were not faulted or denied.

He said that there was no copy of the purported resolution of the impeachment panel presented before the court.   He faulted the secret trial of the plaintiff, emphasizing that the proceeding for the removal of the deputy governor should not be hidden from the public.

Justice Odugu ruled that mere rearing of poultry by the deputy governor did not in any way constitute gross misconduct in the performance of the functions of his office, adding that it had nothing to do with section 188 of the constitution. 'The defendants wrongfully exercised their powers by removing the deputy governor  for maintaining poultry which does not contravene section 188 of the constitution,' he said.

He further said that the alleged blatant refusal of the deputy governor to attend two public functions assigned to him by the governor could not amount to gross misconduct, insisting that ' only a grave violation or breach of the constitution that can be regarded as a gross misconduct.'

The judge declared that 'section 188 sub-section 11 of the constitution is not a weapon of the House of Assembly   to police the duty of the deputy governor or to hound him out of office and besides, the plaintiff had told the court that the only constitutional duty assigned to him by the governor was the chairmanship of the boundary adjustment commission.'

Condemning the secret trial of the deputy governor, Justice Odugu said he could not understand how the panel arrived at the decision that the refusal of the plaintiff to attend two social functions constituted gross misconduct more so when the trial was done in camera. 'The office of the deputy governor is a public office, his election was also by the public, any secret trial therefore is a flagrant breach of constitutional provision for fair hearing,' he added.

Justice Odugu therefore declared the state assembly violated their constitutional duties by embarking on the removal or impeachment of the deputy governor when there was no basis for it, saying the nomination of Rev. Nwoye to replace Onyebuchi was illegal and unconstitutional.

Setting aside the notice of impeachment and nomination of Nwoye, Justice   Odugu ordered the reinstatement to office of the Sunday Onyebuchi from 27th August, 2014 to May 28, 2015. The plaintiff, the court further ruled, was entitled to receive salaries, entitlements and benefits including pension for the period he served as deputy governor and awarded an exemplary and cumulative cost of N25,000 against each of the 25 defedants amounting to N600,000.

Reacting to the judgement, Onyebuchi, who was in court with his wife, Nnekka, told reporters that he had been vindicated and has forgiven all those who were used to perpetuate the injustice. 'Some of them have come to confess and plead for forgiveness, saying that they were used and I have forgiven them and even those who haven't come to me.   The God I serve is God of forgiveness and therefore I hold nothing against them,' Onyebuchi said.