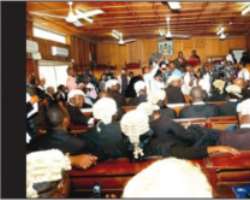 SAN FRANCISCO, December 18, (THEWILL) – The Court of Appeal sitting in Abuja on Friday affirmed the verdict of the Akwa Ibom Election Petitions Tribunal, which nullified the April 11 governorship election held in 18 out of the 31 Local Government Areas, LGA, of the oil-rich state.

A five-man panel of judges at the appellate court unanimously dismissed an interlocutory application filed by Governor Udom Emmanuel and candidate of the Peoples Democratic Party, PDP, in that election challenging the locus standi of the petitioners – the All Progressives Congress, APC, and its candidate, Umana Okon Umana.

Emmanuel also challenged the jurisdiction of the tribunal to entertain the case.

But in its decision Friday, the appellate court invalidated the governorship poll as conducted in the 18 LGAs of the state, stressing that it was not conducted in substantial compliance with Section 85(1) of the Electoral Act 2010. It further noted that there were inconsistencies in the number of voters accredited during the election.

The state election petitions tribunal had on October 21 nullified the elections that took place in 18 out of 31 local government areas in Akwa Ibom state without unseating the governor. Observing that elections were not properly conducted in the affected local governments, it ordered the Independent National Electoral Commission, INEC, to conduct a re-run election in those areas.

Meanwhile, the higher court is yet to deliver its judgment on Umana's appeal against the tribunal's judgment in which, he is seeking an outright cancellation of the election results.