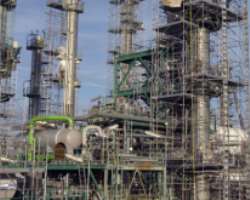 Nigeria, aiming to boost its crude output, is still grappling with decrepit refineries that fail to produce fuel, which it has to import, the head of state oil firm the Nigerian National Petroleum Corporation (NNPC) said on Thursday.

Oil production is forecast to reach 2.1 million barrels of oil per day (bpd) this year and should rise to 2.4 million bpd next year, Emmanuel Ibe Kachikwu told reporters, though none was being refined domestically.

“In October we had zero performance (from refineries), we didn’t produce anything,” Kachikwu said. “As of now the refineries are still not working. We are going to try and repair them.”

In an apparent attempt to lower fuel subsidy costs amid sharply lower oil revenues, Kachikwu said refined products would be sold in a band between 87 and 97 naira per litre that is adjusted based on crude prices. Prices are currently set at 97 naira per litre regardless of market prices.

“So it’s no longer subsidy as in the air, it’s not a static number,” he said. “Probably once in quarter we say what is the price of crude, how can we reflect (it) in the price of the product to make sure we don’t pass the ceiling of 97 (naira).”

In November, the country’s top refinery official told Reuters that Nigeria aimed to produce up to 30 percent of its domestic gasoline needs by the first quarter of 2016 following an overhaul of the refineries.

Kachikwu reiterated Africa’s top oil producer was trying to secure external funding to revamp the refineries before considering their sale. “We cannot sell the refineries in their present state. They will be worth nothing.”

President Muhammadu Buhari, also oil minister, has made refurbishing the country’s dilapidated refining system a priority as he seeks to reform an industry hampered by mismanagement and corruption.