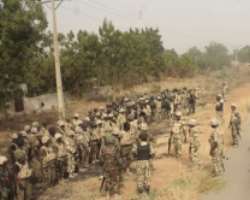 BEVERLY HILLS, December 16, (THEWILL) – Following last week's alleged massacre of members of the Shi'ite religious group in Zaria, Kaduna state by some soldiers, the Amnesty International in Nigeria, AIN, has berated the human rights records of the Nigerian military.

In a statement issued yesterday in Abuja, the human rights body called for an urgent investigation into the matter with a view to bringing to justice anyone who has a hand in the unlawful killings.

The Director of AIN, Amb. Mohammed Ibrahim, was quoted as saying: “Firearms should only be used as a last resort, if strictly unavoidable in order to protect life. It is crucial that the authorities refrain from using excessive force and ensure that anyone responsible for unlawful killings is brought to justice in fair trials.”

“As well as the loss of life, many members of Islamic Movement of Nigeria (IMN) were arrested, including the leader of the group, Ibraheem Zakzaky, who was picked up at his residence on Sunday morning and remains in detention. It is unclear if he has access to a lawyer. Reports suggest that the dead and injured were taken to the military hospital and to the university teaching hospital.”