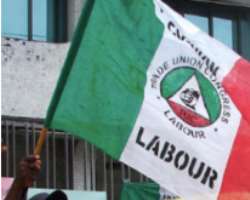 BEVERLY HILLS, December 16, (THEWILL) – Indications emerged yesterday that the Nigeria Labour Congress, NLC, has started mobilising its relevant organs, civil society groups, organisations and professional bodies to frustrate plans by the Federal Government to revert the pump price of petrol to N97 from the current N87 by next year.

This is coming on the heels of media reports quoting the Minister of State for Petroleum Resources, Dr. Ibe Kachikwu, as saying at the National Assembly that the government might change the price of petrol as well as adopt a strategy of gradual removal of fuel subsidy.

The labour body accused the minister of being an agent of those who were working to undermine the President Muhammadu Buhari administration over his constant insistence on the removal of subsidy on petroleum products.

Making the workers' position known at a symposium to commemorate the 10th anniversary of the death of Comrade Chuma Ubani, the NLC President, Comrade Ayuba Wabba warned that if Buhari wants to succeed in his programmes, he must be wary of the likes of Kachikwu.

He noted that the minister had always shown his preference for subsidy removal right from when he was appointed the Group Managing Director of the Nigerian National Petroleum Corporation, NNPC, even when the President had made it clear that he was not yet convinced that the ordinary citizen could afford increased prices of petroleum products.

In Wabba's words, “At the Senate, the Minister of State on Petroleum Resources talked about 'gradual removal strategy', which, he said, would begin with the return to the pump price of N97 per litre from the current N87. Mr. Kachikwu threatened of the possibility of the Buhari government considering total withdrawal of fuel subsidy.”

“According to him, 'the government doesn't need to fund subsidy. There is energy around the removal of subsidy. Most Nigerians talked to today would say that's where to go'.”

“With the figures being disclosed as the amount our political elite have stolen in the name of security, but which are used to 'consult' spiritualists etc, listening to Mr. Kachikwu talk about the so-called most Nigerians that they talked to wanting fuel subsidy to be removed, one can only wonder out loud who these Nigerians that the Kachikwus of this world are talking to.”

“These Nigerians certainly won't be the millions of downtrodden mass of Nigerians who weathered every odd, including threat of violence to vote out the PDP- led government and embraced on March 28, 2015, the change agenda they believed Muhammadu Buhari symbolised.

“The NLC wishes to state without equivocation that Kachikwu represents the same forces that have misled past government on the issue of removal of subsidy and deregulation of the downstream operations of the petroleum industry.

“While the position of congress on these issues clearly remains unchanged, we make bold to however caution President Buhari to be wary of the likes of Kachikwu, whose sweet tongues on the issue of subsidy removal had derailed former Presidents from achieving their lofty goals.

“Now that the Buhari government may have, through Kachikwu, sent the message to Nigerians on the path it wishes to take on the issue of petroleum subsidy, congress will meet its relevant organs, hold consultations with civil society and other organisations and professional bodies and carry out the instruction as we will be mandated.”

The NLC President continued that: “Against the background of the serious national crisis we are currently going through, caused by the mismanagement and recklessness of our political elite since the return of civilian rule in 1999, there is always the temptation to ask whether the struggle for democracy was indeed worth it after all.

“However, I think that no matter the level of our frustration, we should not allow the question to be posed in this way. In modern times, there is hardly any alternative to democracy. What I think we ought to be questioning is the quality of our democracy and what we, labour and civil society actors should be doing to improve the quality of this democracy.

“We should rightly be addressing the question of how the working class and its allies can participate in the struggle for capturing political power so that we are able to project the programmes and the visions of the working class in rebuilding our nation.

“We must renew our determination to enthrone accountability by the political class in our country. We need to ensure that we apply maximum pressure on government so that all the ongoing disclosures of massive pillages and crimes against Nigerian people do not go unpunished,” he stated.