D'Banj And DON JAZZY Are Not Fighting - Management 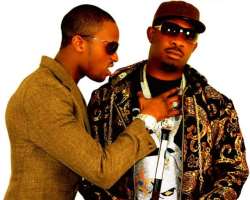 Last week, while the Mo'hits crew were in the US, on tour about 6 states, news filtered that Nigeria's hip hop stars D'Banj and producer, Don Jazzy have fallen apart, over the rising profile of music sensation, Wande Coal.Rumour mongers have it that their fight is so deep that D'Banj and Don jazzy almost exchanged blows, but for the prompt intervention of people around.

The two guys who returned to the country last week Monday along side Wande Coal disclosed that they are not about the story describing it as the work of some their enemies who are trying to pull them down.

In chat with the management of Mo'hits Crew, they said, We read the story they are fighting, but I must confess to you that the relationship between Don Jazzy and D'Banj is as smooth as ever.

Yeah, people quarrel and we will not rule it out that they quarrel sometimes over minor issues, but that is just part of life.Even couples and there is no way you and your may have not disagreed on or two issue before, it is a normal thing.

People can say what they wish, but the fact remains that D'banj and Don Jazzy are in good terms. In fact, if there is going to be any misunderstanding between them, it cannot be because of Wande Coal. Wande is D'Banj pride and investment, so why would he be happy about his growth.D'banj is also the Vice President of Mo'hits, so it would be a good thing for Wande to grow, because he will also benefit from it .So there is no problem between D'Banj and Don Jazzy. We are all happy at Mo'hits