Abuja Disco Confirms Receiving N125m From Dasuki, Says It Was For Energy Charges 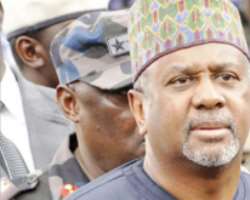 SAN FRANCISCO, December 16, (THEWILL) – Abuja Electricity Distribution Company (AEDC) has distanced itself from media reports that the company also got its share from the allegedly misappropriated $2.1 billion voted for security by the Goodluck Jonathan's administration, and for which Sambo Dasuki, the former national security adviser, is currently standing trial.

“Our attention has been drawn to a report in the print and on electronic media of Monday, December 14, 2015, to the effect that AEDC received the sum of N125, 503,255.11 from the Office of the National Security Adviser (ONSA). AEDC wishes to clarify that the said sum was paid by the ONSA as part payment for electricity consumed by the Presidency,” the company said in an official statement made available to THEWILL by Ahmed Shekarau, its communication officer.

THEWILL recalls that Dasuki is being prosecuted over an allegedly misappropriating about $2.1 billion meant for the purchase of arms for the military.

He is charged alongside Chief Raymond Dokpesi, the founder of Daar Communications plc, and former Sokoto State governor, Attahiru Bafarawa.