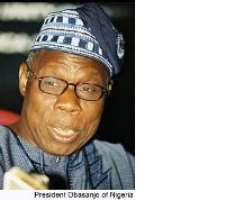 An uphill battle appears underway over the move to elongate the tenure of President Olusegun Obasanjo beyond 2007 as the National Assembly reconvenes on Tuesday in Abuja to commence the second reading of the 1999 Constitution Amendment Bill 2006.

The bill seeks to amend some sections of the constitution including the present two terms of four year each tenure for President.

Also, there are indications that more Senators and House members are abandoning the pro-3rd term camp to join forces with the group opposed to the idea.
But there were indications on Saturday that the pro-third term legislators are set to make some adjustments to the contentious amendment bill.

The planned adjustments are in respect of Sections 182 and 308 of the 1999 Constitution in order to extend the two terms of four years each for governors to three terms of four years and retain immunity from criminal charges for state chief executives which was removed in the amendment bill.

According to THISDAY checks, the move to make adjustments to the bill may raise some problems, one of which is whether the pro-third term campaigners will have to withdraw the already distributed copies of the bill and reprint new ones to accommodate the changes.

If that is done, there will be another contentious issue of whether the bill will be laid afresh for the first reading or whether the lawmakers will commence the second reading right away.

It is however feared that at this point, the expected controversy on the 3rd term proposal may break out earlier than envisaged because the anti third term legislators may come out to oppose adjustments to already distributed copies of the amendment bill.

The Chairman of the Publicity sub-committee of the 2007 Movement, which is the umbrella body of lawmakers opposed to the third term, Senator Mohammed Dansadau, told THISDAY last night that the group was waiting for the campaigners of tenure elongation over the adjustments.

"Our position remains that we are opposed to the amendment of sections 137 and 182 which deal with the tenure of President and Governors. We are waiting for whatever adjustments they want to make. Elon-gation of tenure will not fly in the National Assembly." Dan Sadau said.

The adjustments being proposed are to pacify governors who were earlier rooting for third term but felt shortchanged by Aso Rock over some provisions in the amendment bill.

Rather than amend section 182 (1)(b) that deals with the tenure of governors, the bill seeks to insert four new sub-sections to section 176 of the constitution which dwells on the establishment of the office of the governor and the qualification for election as governor.

The four new sub-sections that bring the total to six, seek to rotate the office of governor among the three senatorial districts in a state in line with the principle of rotation adopted by the Mantu Committee at its controversial Port Harcourt retreat.
Also in the amendment bill, the criminal immunity provided for governors under section 308 of the 1999 Constitution was removed.

It was not clear last night whether the adjustments to the amendment bill will also affect the Joint State and Local Government Acc-ounts and the state electoral commissions both of which were recommended for abolition in the amendment bill but the two issues were part of the provisions of the bill that rankled the pro-third term governors.

The Deputy President of the Senate and Chairman of the defunct National Ass-embly Joint Committee on the Review of the 1999 Constitution, Senator Ibrahim Mantu, had laid the bill before the Senate on Wednesday April 12. That was the first reading of the amendment bill.

During second reading, the lawmakers engage in debate on the general principles of the bill. And Mantu who is sponsoring the amendment bill on behalf of his committee, will first speak on highpoints of the bill before other Senators will take their turns in alphabetical order of their names.

But besides the controversy on the adjustment to the bill, the trend in the two houses of the National Assembly has shown that the third term plot is fast losing support.
THISDAY checks, for instance, revealed that the pro-third term group has just about 46 sure Senators while those against it in the Senate are about 43. About 20 other Senators are undecided.

For third term to sail through in the Senate, there must be two-thirds of the Senators, that is 73, to support it, which means those rooting for tenure extension are short by 27.

240 members are required in the House of Represent-atives to pass the amendments. The pro-third term members are said to be only 144 as against 168 that are opposed to it. 35 other members are undecided.