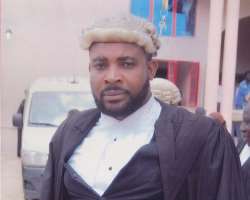 The court of Appeal sitting in Abuja on the 8th of December, 2015 entertained adoption of briefs of Argument by lawyers for Governor Udom Emmanuel led by Damian Dodo (SAN) and those of APC led by Wole Olanikpekun (SAN).

A one time Local Government Chairman of Ibiono Ibom in Akwa Ibom State, seasoned legal practitioner, international convener of Akwa Ibom League of Lawyers who is a very committed member of the defence team for Governor Udom Emmanuel fielded questions from newsmen in Abuja after the court session. Excerpts:

Sir, please can you give us insight into what went on in court today?

Well, as you would have witnessed while the proceedings lasted, the business of the day was adoption of briefs by the parties in the various appeals brought against the October 21, 2015 judgment of Governorship election in Akwa Ibom State.

We would like to understand the cases of the parties and the arguments put forward before the court considering that both the PDP and APC are appealing against the Tribunal’s judgment.

Now, you will need to understand that the judgment of the tribunal had upheld that Governor Udom Emmanuel was validly elected by the majority of the lawful votes cast in the election but however directed that there should be conduct of re-run election in 18 local government areas of the state. The APC feels the tribunal was right in a sense, therefore our argument in the court of appeal is to point out the inconsistency and the error made by the tribunal. How would you justify that the election of 11th April, 2015 was conducted in substantial compliance with the laws and the Governor was validly elected yet turn around to ask for a re-run election on the basis that “voters were disenfranchised” in 18 Local government areas?

Non of the parties at the tribunal complained about “disenfranchisement”. Therefore, we are asking the Court to Appeal to upturn that part of the judgment as having been made in error and without any basis as you cannot, in law, grant prayers that were not made before the court. No court of law or Tribunal is expected to act as father Christmas; and it is important that you know that the Tribunal is the lowest in the rung of judiciary hierarchy in respect of the Governorship election while Supreme Court is the final bus stop.

Again, you cannot rely on the tainted and discredited testimony of a self-serving individual to hold that election did not take place in hundreds of polling units as was erroneously done by the Tribunal. Could such individual have been a ghost or a magician to have been present in hundred places at the same time? So, we want the Court of Appeal to do the proper thing by confirming that the election of Governor Udom by the overwhelming majority of electorate in Akwa Ibom was done in substantial compliance with the Electoral Act and other extant laws and as such there is no need for a re-run in any part of the state.

BUT THE APC AND ITS CANDIDATE WANT THE GOVERNOR TO VACATE HIS SEAT AND ANOTHER ELECTION CONDUCTED IN ALL 31 L.G.As...?

My dear brothers, such argument is not only pre-posterous, it smack of infantile pipe-dreaming and is grossly unmeritorious. Of course, a lawyer is duty bound to advance the case of his client, and as you know, I am in court of represent the Executive Governor of Akwa Ibom State in the person of Mr. Udom Emmanuel. Anybody who puts up the argument that the governor should vacate his seat certainly has a case against God Almighty because leadership is God’s prerogative.

You will recall the medical parlance that doctors treat and God heals? I tell you frankly as an experienced defence attorney, our team had marshaled out a very strong defence right from the Tribunal to this appeal stage but it is now crystal clear that Governor Udom Emmanuel has a rock-solid covenant with God Almighty and cannot even be hurt by any court of law.

The seat of Akwa Ibom Governor is firmly secured and anchored on what is known as “Divine Mandate” and for which reason, all the legal fire works by lawyers and patent errors of the Election Tribunal could not tamper with Governor Udom’s seat. I will urge you, therefore, to disregard arguments that the Governor should vacate his seat as such are of no moment.

Are you saying even where the court confirms that there should be re-run it won’t hurt the governor because he has “a rock-solid covenant with God” (if I may borrow your words)?

Please, feel free to quote me that no court order for a re-run or anything whatsoever can tamper with Governor Udom’s Divine Mandate for Akwa Ibom people. I hope you know that aside my professional assignment in the Governor’s Defence team, I am a bonafide citizen of Akwa Ibom State with serious political stakeholding?

Indeed, I can confidently confirm to you as a former Local Government Chairman in the state that Governor Udom Emmanuel shall serve as Governor for 8 years as permitted by the Constitution of the Federal Republic of Nigeria. Of course, elections are not conducted in court, so when we are done with our professional functions as lawyers; we’ll sure match to the field to execute our political expertise. If the opposition party in the state wants election conducted 100 times in the state, quote me that PDP will win any election in Akwa Ibom State 100 times over…