Nnedi Okorafor Selected For Triggerfish Story Lab, Out Of Africa-Wide Search For Storytellers 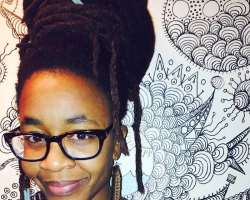 Triggerfish Animation Studios has selected four features and four TV series for development from the inaugural Triggerfish Story Lab, established with the support of The Department of Trade and Industry and The Walt Disney Company.

“From misfit Zambian girls who become low-budget superhero-super-spies to a stubborn 12-year-old Kenyan girl who defies tradition by racing camels, from a young South African scientist who accidentally turns her annoying little sister into a new source of electricity to a timid lemming who must defy his nature, these are characters we fell in love with,” says Anthony Silverston, head of development at Triggerfish. “We’re excited by the range of stories, that explore everything from contemporary urban to Afro-futuristic worlds. We’re looking forward to bringing something fresh to the screen.”

The feature films selected into the Story Lab are:
The Camel Racer(Wanuri Kahiu and Nnedi Okorafor – Kenya/Nigeria)

The Story Lab received a whopping 1 378 entries from 30 countries across Africa. 23 features and 14 TV series were shortlisted and developed over a two-week intensive workshop in Cape Town in November 2015 with Orion Ross, Vice President of Content – Animation, Digital and Acquisitions Disney Channels EMEA, and leading Hollywood script consultant Pilar Alessandra, author of The Coffee Break Screenwriter.

“It was impressive to see how much all the projects had improved after the workshop,” says Orion. “Clearly the Story Lab was doing something right, and it must have been incredibly difficult to pick just a few projects to move forward.”

The shortlist was then evaluated by an expert panel that included Peter Lord, the British director of international blockbusters like Chicken Runand The Pirates! In an Adventure with Scientists; Hollywood writers Kiel Murray (Cars) and Jonathan Roberts (The Lion King); and a panel of development executives from both the London and Los Angeles offices of The Walt Disney Company, as well as South African comedian David Kau, screenwriter Paul Ian Johnson, and Triggerfish’s development team of Anthony Silverston, Wayne Thornley and Raffaella Delle Donne.

Triggerfish had planned to select three projects for film and TV respectively, but increased this to four for each due to the quality of the projects.

“Story Lab exceeded our expectations at every turn, from the number of entries to the quality of the projects to the way they improved dramatically during the two-week intensive with Pilar and Orion,” says Triggerfish CEO Stuart Forrest. “Narrowing it down to eight projects was difficult enough; narrowing it down to six would have been almost impossible.”

The selected storytellers will start the new year with a two-week immersion trip to Disney’s headquarters in Burbank, California, where they will receive mentoring from key studio and television executives.

Triggerfish will be investing up to R44m ($2.8m) over the next three years in The Story Lab. The development process can take a number of years. For each phase of development, Triggerfish will provide financial support, workspace, and expert guidance by internal and international consultants and mentors, as well as a route to market through top-tier relationships with leading Hollywood agency William Morris Endeavor.

Animation has proven to be a successful medium for South African films to travel internationally, with Triggerfish’s films Adventures in Zambezia and Khumba being distributed in over 150 countries and dubbed into over 27 languages.

For more information, keep an eye on http://triggerfishstudios.com.

About The Walt Disney Company in Europe, Middle East and Africa:

The Walt Disney Company, together with its subsidiaries and affiliates, is a leading diversified international family entertainment and media enterprise. Disney is a Dow 30 company and had annual revenues of $52.5 billion in its last fiscal year, the highest in the Company’s history (FY15).

The Walt Disney Company has been at the forefront of family entertainment in Europe, Middle East and Africa (EMEA) for over 80 years and is dedicated to creating innovative, entertainment experiences for children and families. The Company has offices in 25 countries and employs more than 5,300 people (and 14,500 employees in Disneyland Paris) and London, UK is the regional headquarters.

The Disney brand is experienced in a number of ways across the region including in cinemas, on TV screens with Disney-branded channels as well as non-branded content, through a wide range of consumer products that are sold at mass market retailers and in Disney Stores across the region. The Disney brand is also experienced at Europe’s #1 tourist destination, Disneyland Paris, which opened in 1992.