Donald Trump: Why This 'Otondo' Is Nigeria’s Best Man For US Presidency 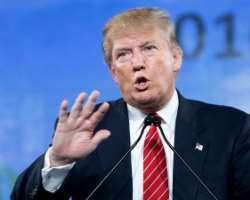 Nigeria - The Christmas lights aren’t shining bright enough; the streets look pale in contrast to previous years of this very season. My fellow countrymen are found haphazardly in queues, at fuel stations, sharing views of the not so cheering news of billions dollars allegedly stolen as the Economy needs a prescription, maybe doses of Mirtazapine.

I feel so helpless, I can’t accuse my government of complacency lest I become a target - of the anti-social bill - up for a 3rd reading at the senate. I can’t blame my government lest by profiling I might be accused of being a wailing wailer. I need a distraction, someone to cheer me up or to cast my frustrations upon. I won’t blame this on the devil; I got me Donald Trump – whoa, what an easy target!

So, Donald Trump has probably pissed most people off, he has said quite a number of things that we consider embarrassing or pretend to be embarrassed about or the downright ridiculous about religion and especially about Africa (of which at least 1% of what he said is somewhat true).

No, I am an not American but America rules the world and my place in that country if politically situated – most likely would be a Republican – so Trump doesn’t speak for all of us. In Nigeria, we care about who becomes the US President, at least lately. Giving is caring and the corruption tainted £11,000 per table Africans-for-Obama fundraiser in Nigeria led by Ndi Okereke-Onyiuke, head of Nigeria’s Stock Exchange at the time, readily comes to mind.

I care about America, but not as much as I do about my country, that is why I endorse Trump, but if I was American I would have otherwise been persuaded. For me its ‘Country First’ like the John McCain 2008 Campaign theme and I think Donald Trump is Nigeria’s best man for the office of the President of the United States. Reminder all my views hence will be as a Nigerian.

Firstly, on the issue of Birthright Citizenship and Anchor babies, I am concerned that it is becoming quite a fad in my country for the Elite and Political class as well as middle class (comprising Entertainers, Mid Career Professionals), who often make advanced savings plans ranging from $10,000 - $100,000 (including logistics and short stay expenses) towards child delivery in the United States of America. I believe it is more than just about the alarming infant mortality rate in the country, but to create a sense of security for their kids as uncertainty belies Nigeria’s future. With Trump’s proposal, I believe there will be disincentive to give birth in America and our hospitals and government can seek to invest in needed infrastructure to make delivery safer and build a future for this country as the escape route offered by being an American by birth gets barricaded.

Secondly, this quotes credited to Donald Trump excites me and suggests like many other similar statements that he won’t be sending Aid our way; “it is necessary that we invest in our infrastructure, stop sending foreign aid to countries that hate us and use that money to rebuild our tunnels, roads, bridges and schools – and nobody can do that better than me.” Most Nigerians hate Donald Trump and think he should undergo psychiatric evaluation.

Honestly speaking, Nigeria does not need Foreign Aid agreeing with President Buhari’s statement to the US VP Joe Biden in July 2015. The US government has given Nigeria over One Billion dollars in aid in the past four years ($1,147.6M) and change is still elusive. Nigeria needs a man like Donald Trump who doesn’t believe in aid to rule the US as we are far from a country still at infancy. Nigeria needs to be weaned off American and European donation and aid. This country must be more responsible for itself and present value if we must deal with the US.

“China, China, China, China”, one must have lost count of how many times Donald Trump uses, misuses and abuses the word China. Obviously China is his problem and this is the third reason why Nigeria needs Donald Trump. China is Nigeria’s largest trading partner with about $23 billion trade volume between both Nations. China has in recent times offered Nigeria a lot of concessionary facilities for the deployment of critical infrastructure, given the importance of Nigeria on the continent. Donald Trump most likely will have issues with this, his war on China may seem a better deal for Nigeria. I will like to have more American corporations backed by the EXIM to invest in critical long-term infrastructure projects in Nigeria, as was the case decades ago. This will definitely benefit Nigeria in terms of expertise and probably less rates or conditionalities than the Chinese. As they say, Competition is good for the consumer and Trump sure does know how to compete with China –as the Landlord himself!

Finally, As a Nigerian, I have never at any time been able to say, within a particular dispensation - that the Nigerian President is smarter than the American counterpart. Nothing perhaps will make me feel better than the day Donald Trump becomes America’s President, this is because I definitely will be able to make such a remark. This is already guaranteed, just imagine this statement was attributed to an American President: “I promise to make America great again by restoring our dignity that we have since lost through Obama. The more reason why I still believe that he, and his Kenyan brothers and sisters should be deported back to Kenya to make America safe”.

Nigeria is served better with Trump’s Otondo presidency but I hope my fellow republicans will not grant Hilary an easy ‘Cruz’ home to victory. Trump off my chest, to face Nigeria’s problems this week – I am Ready!