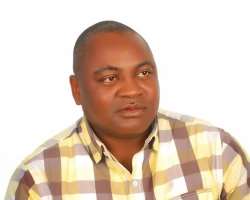 The commissioner for Information in Akwa Ibom state, Mr Aniekan Umanah, has fallen the latest victim to the alleged planned systematic attack on top PDP stakeholders in the state.

His elder brother Mr Ifiok John Umanah, a retired banker was Tuesday evening whisked off into a red Toyota Highlander Jeep to an unknown destination.

According to eye witnesses at the scene of the incidence, Mr Ifiok Umanah was dragged away by gun-wielding unknown men who chanted 'udom must go' as they shot into the air while drawing him into their own car.

It would be recalled that intelligence reports had revealed that APC two weeks ago, had marked some key PDP stakeholders for attack, with the hope of weakening the Udom Emmanuel 'as support base.

Several media channels had also reported that some alleged cult boys had been approached and induced with huge sums of money to destabilise the mindset of Governor Emmanuel's supporters by either kidnapping or maiming their love ones.

Although the commissioner could not be reached at press time, a close family member confirmed the development and said the security agencies have been contacted and promptly informed of the saga.