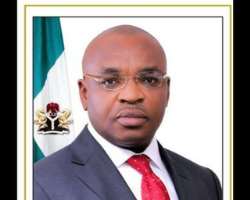 The Governorship Election Tribunal Verdict of 21st October, 2015 delivered by Hon. Justice Sadiq Umar which upheld the April 11, 2015 election of His Excellency, Mr. Udom Emmanuel as the candidate who scored the majority of lawful votes cast and therefore the validly elected Governor of Akwa Ibom State has now disgracefully exposed the phantom lies of the Umana Umana led APC.

It is important that we in the Akwa Ibom League of Lawyers put on record our deepest respect for your Lordships, the Chairman and Members of the Tribunal who took great patience to hear the case and also delivered judgment to the best of their ability. We equally appreciate their comment after the judgment that even where they might make mistake, they have confidence in the Appellate Courts to correct such mistakes and uphold justice.

Of course, as a body of legal experts and active participants in the course of adjudication in the Election Tribunal which commenced sitting in Uyo but later disbanded, reconstituted and relocated in controversial circumstances (founded on APC's deceitful alarm) to Abuja, it would be sacrilegiously derelictious not to rise in absolute defence of the sacred facts as upheld in the aforesaid Tribunal’s verdict as against the irresponsible/disgruntled lies being peddled by APC in the state.

Therefore under a four (4) pillar sub-head, we hereby set out to state the sacred facts as follows:

a. That while Akwa Ibom people prepared to vote in the April 11, 2015 election, Umana Umana, the APC candidate (being an inexperienced voter who probably had never voted in any election before) and his cohorts idled about and strayed to a wrong polling units as revealed in page 150 of the Tribunal’s Judgment and preoccupied themselves on means of disrupting the election in order to set up disputations at the Election Tribunal.

b. That few days after the successful conduct of the governorship election, Umana boasted in page 10 of the Daily Sun Newspaper of Monday, April 20, 2015 that he had assembled a crack team of election litigation experts to upturn the election at the tribunal and then engaged all available avenues of propaganda after he filed his nebulous petition to deceive Akwa Ibom people that:

• There was no accreditation, no election and no coalition of election results took place anywhere in the state;

• That Card Reader report of accreditation obtained by them showed that accreditate voters were less than the total number of votes declared;

• That the use of Card Reader was compulsory; and

• That they have hired forensic experts to ensure the proof of their petition for cancellation of election in the state.

i. That at the tribunal, Umana's APC called total of 52 witnesses (98% of whom never went to their polling unit to vote) including Umana Umana himself who testified as PW48 and was upbraided by the Tribunal as the one who disenfranchised himself by failing to go to his unit to vote! (See Page 150 of the CTC of the Tribunal Judgment).

ii. That Umana's so called “experts” testified as PW49, PW50, PW51 and PW52 and tendered so-called forensic reports on inspection of the materials used for the election for which the Tribunal’s Judgment in page 145 noted thus: “The high point of the evidence of PW50, 51 & 52 is that none of them qualified to be properly so called as “experts” capable of persuading this court to consider their evidence… as required by the Evidence Act. Our conclusion is premised on the wishy washy and haphazard analysis they carried out”

iii. That upon close of Umana APC's worthless case, the Tribunal gave 1st, 2nd and 3rd Respondents the opportunity to respond during which period the fruitless lies of Umana's APC were exposed, diffused and rebutted with superior evidence/reasoning, one of which evidence of the respondents, the tribunal in pg 126 declared thus: “his evidence (i.e INEC Witness) on accreditation therefore is unshakable as mount Gibraltar”

iv. That the Tribunal then called for final written addresses which were adopted by all the parties on 8/10/2015 and the case adjourned for judgment that eventually came on 21/10/2015.

3. Sacred facts of Umana's APC reprehensible voyage of doom in influencing the Tribunal's verdict and reckless misinterpretation of the verdict to deceive the Nigerian public:

i. That it smacked of extreme devilish desperation that in spite of the worthlessness of Umana's APC petition, they still had the effrontery of embarking on the reprehensible voyage of influencing the tribunal's verdict when they caused to be published on page 8 of Nation Newspaper of 21/10/2015 (only few hours before the judgment) that “the Tribunal will nullify election in only 10 to 20 L.G.As leaving the remaining LGAs intact…”

ii. That when the Tribunal eventually gave its verdicts, it turned out to be in line with the reprehensible prediction of Umana's APC as stated in their memo published few hours to the judgment.

iii. That it has become of great concern not only to distinguished members of the legal profession but to the Nigerian public that even after the Justices at the Tribunal had upheld the election of His Excellency, Mr. Udom Emmanuel as Executive Governor of Akwa Ibom State and discountenanced Umana's APC 'no election lies, ill-fated card reader report and his 419 so-called “expert” evidence', while ordering a re-run election in 18 L.G.As of the state, reckless misinterpretation of the Tribunal’s verdict to deceive the masses has become the past time of Umana, APC and their cohorts.

iv. That, as it is, Umana's APC seems to be day-dreaming that their wild and reckless misinterpretation of the Tribunal’s Judgment can deceive the public and have the effect of negatively influencing the appellate courts where all attention is now focused.

4. The task before the appellate courts (Court of Appeal/Supreme Court):

i. It is worthy of note that Umana's APC is having the pipe-dream that they can arm twist the Appellate courts with wild political propaganda as shown in their publication of the Tribunal's Verdict before it was delivered. Already, there is an evidence in the public domain termed "APC Penetration Strategy 2015" published in the internet wherein they plan to use extra legal means to nullify election and employ clandestine means to clamp down PDP members in the state!

As ministers in the temple of justice, extra legal antics cannot make us loose sleep because the law is sacred and supreme. Our attention is focused and our interest streamlined now that legal processes have been filed at the Court of Appeal for a review of the myriad of flaws in the Tribunal's verdict. A major task before the Appellate court therefore appears to be thus:

ii. Is the tainted and discredited testimony of a single person sufficient in law to sustain the cancellation of a validly conducted election in an entire local government area in the light of the legal principle enunciated by the Supreme Court in the case of Ngige & 1 other V INEC & 3 Ors (2015) INWLR (Pt. 1440) [email protected] para A-D to the effect that a "disenfranchised voters must give evidence to establish the fact that they were registered but were not allowed to vote" and "all the disenfranchised voters must testify to show that if they were allowed to vote their candidate would have won…"?

iii. Is it possible that the Appellate Court will fail to uphold its earlier judgment in the case of Agbaje V APC of Lagos which discountenanced the use of card reader as basis for nullification of a validly conducted election?

CONCLUSION
We in the Akwa Ibom League of Lawyers are conscious of the Umana Umana and APC’s boast that because they have formed the Federal Government, they can influence and procure a judgment through the back door at the Appellate Courts. However, our faith remains unshaken because the integrity built over the years by the five (5) Justices of the Court of Appeal and Seven (7) Justices of the Supreme Court who are statutorily empowered to sit to review the Tribunal’s judgment can never be as cheap as Umana APC’s spittle.