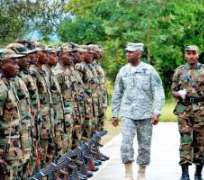 “We don't want to see our guys going in and getting whacked . . . We want Africans to go in.”

…
Within the military realm, the terms proxy and surrogate are largely interchangeable.

I have included some current pictures of partner/surrogate/proxy military in Africa, and some historic pictures as well. It is important not to forget the history and the heritage of this relationship. Uganda President Museveni's name means “Son of a man of the Seventh”, in honour of the Seventh Battalion of the King's African Rifles, the British colonial army in which many Ugandans served during World War II.

Below are pictures of the Kings African Rifles, KAR, during the riots and disturbances in Nyasaland, which marked the end of colonial rule. The KAR acted as partners/surrogates/proxies for British colonial rule. I also added a few pictures of riot control training from a recent AFRICOM partner/surrogate/proxy training exercise in Benin for visual comparison. Experience tells us that in many countries these skills are likely to be used for internal counter insurgency operations and to quell legitimate political dissent, not unlike some domestic assignments given the former Kings African Rifles, who also served heroically in World War II.

Maj Shawn T. Cochran wrote Security Assistance, Surrogate Armies, and the Pursuit of US Interests in Sub-Saharan Africa published in the U.S. Air University's Strategic Studies Quarterly Spring 2010 v.4 #1 (PDF). He is quite interesting on the subject of US surrogates and partners in Africa, and on historic and current US efforts to create and use African partners/surrogates/proxies.

In the words of a senior US military officer assigned to AFRICOM, the United States seeks to enhance regional military forces because, “We don't want to see our guys going in and getting whacked . . . We want Africans to go in.”

One thing he points out early on is:
There is no official DoD definition for surrogate force, the second key concept. For many, the term proxy may be more familiar. Within the military realm, the terms proxy and surrogate are largely interchangeable. The use here of the latter reflects a desire to establish a degree of distance from the related, yet viscerally more contentious, concept of proxy war. Given the African experience, any allusion to proxy war will likely elicit recollections of how external powers, both in the colonial and Cold War eras, competed by initiating, escalating, and exploiting local conflicts. Today, many who wish to denigrate a given foreign policy in Africa simply apply the label “proxy war” for dramatic effect

I am one of those who uses the label proxy war not just for dramatic effect but to keep in mind an accurate historic context for viewing current US military adventurism in Africa.

… a surrogate force is defined as an organization that serves the needs or interests of a secondary actor—the sponsor—by employing military power in place of the sponsor's own forces. Implicit within this definition is the requirement for the sponsor to fund, equip, train, or otherwise support the surrogate. The sponsor also must exercise at least some form of control or influence over the surrogate.

Cochran discusses the term partnership:
US policy makers and defense personnel alike speak regularly in terms of “building partner capacity.” The dialogue surrounding the standup of AFRICOM certainly follows this trend. This is probably more palatable than the notion of developing surrogates, but the palatability comes with a downside. Bertil Dunér outlines the three dimensions of a surrogate relationship as

compatibility of interests,
material support,and
power.
Of the three, power, or influence, exerted by the sponsor is most critical.

… By analyzing, strategizing, and implementing security assistance in terms of a partnership instead of a sponsor-surrogate relationship, one is perhaps more likely to marginalize the critical, albeit controversial, factor of donor influence and control.

Such marginalization may affect adversely the degree to which security assistance programs achieve US objectives.

Cochran uses two case studies to explore US surrogacy in Africa, the Nigerian intervention in Liberia in 2003, and the Ethiopian invasion of Somalia in 2006 and its aftermath.

The surge in US security assistance to Nigeria from 2000 to 2003 was closely tied to the US government's expectation of Nigeria as a lead contributor to subregional and regional peace support operations. From the US point of view, Nigeria's hesitancy to respond to the Liberian crisis and attempt to pressure the United States into committing its own forces represented a degree of “shirking,” defined within agency theory as not doing all that was contracted or not doing the task in a desirable way.

…
Beyond the factor of conflicting goals, shirking is also more likely in situations where there is significant outcome uncertainty and thus significant risk.

Particularly noteworthy to the role of partner/surrogate/proxy is this point that Cochran notes:

Nigerian lack of enthusiasm for the mission stemmed in part from the inculcation of democratic practices. In a democracy, the state military ultimately serves as an agent of the people. Where Nigerian dictators had been able to employ the military whenever and however they saw fit, the democratically elected leadership, accountable to Nigerian public opinion, found it increasingly difficult to justify and garner public support for the expenditure of troops and national treasure in external conflicts.

Democracy is likely to discourage military surrogacy. When the people in a country have a say, they must see a good reason and a potentially positive outcome to be willing to spend national blood and treasure. Democracy was at work preventing Nigeria and Ghana from participating in the disastrous US exercise in Somalia. Uganda and Rwanda, being only nominally democracies, and actually run as military governments, make much better surogates and are favorites of the US Africa Command and significant recipients of US military funding. Uganda has contributed a great many soldiers to the Somali exercise. The development of military partners/surrogates/proxies is an enemy of democratic governance.

Cochran also includes the following quote, which has continent wide implications. In the Cold War you called your enemy a communist in order to get military assistance, only the word has changed.

“The new game in Somalia is to call your enemy a terrorist in the hope that America will destroy him for you.”

The US put considerable pressure on Ghana and Nigeria to contribute to the Somali disaster.

… the failure of Ghana and Nigeria to respond is of particular interest. Both received substantial US security assistance funding in 2005 and 2006. Both, at the urging of the United States, pledged troops to AMISOM and in return were promised additional US training and equipment tailored specifically for the operation. The United States also agreed to provide logistical support. Still, despite significant US diplomatic pressure, neither country ever deployed its forces to Somalia, each offering a continuous litany of reasons for the delay. When asked to explain this lack of response despite previous pledges, a senior US military official in the region opined that Somalia “scared the . . . out of them” and that they had no direct interests related to the mission. In other words, “Why would Ghana care about Somalia?”

And that is the key question. There is no reason on earth that benefits Ghana why Ghana should become involved in Somalia. I think Ghana has shown great wisdom. Ghana should be wary, it has received quite a bit of “assistance” through the ACOTA program.

Why invest long term without any guarantee of return? Why not just wait until the need arises and then tailor security assistance to provide only the willing actors with what is necessary for a specific intervention? This would ostensibly eliminate some of the uncertainty inherent in screening and mitigate agency loss from shirking behavior. The United States, in fact, has moved in this direction over the past few years. ACOTA, in particular, has been utilized repeatedly for such “just in time” security assistance.

Summing up the US approach to partnerships/surrogates/proxies Cochran writes:

From the case studies, it is apparent that the United States takes two broad approaches to developing surrogate forces in Africa. The first derives from the perceived strategic potential of a key actor. It consists of a longer-term security assistance relationship not tied directly to any specific intervention. …

The second can be characterized as a “fire brigade” approach. This is more ad hoc and involves a short-term use of security assistance to generate support for a specific intervention and preparing willing participants just prior to deployment.

He has the grace and intelligence to tell us:
One should not take from this discussion that Africa's problems or threats to US strategic interests in Africa are best dealt with through military means. In most cases, military force, even if employed by a surrogate, is not the answer but sometimes it is. Given the nature of the African security environment, it is sometimes impossible to pursue broader economic, political, and humanitarian aims without a concomitant threat or application of arms.

Through its various security assistance programs, the United States now seeks to build both the capability and willingness of African states to employ military force throughout the region in a manner that supports US strategic interests and precludes the requirement for direct US military intervention. The United States, in effect, is seeking to develop surrogates.

Koranteng writes:
I have many memories of the two coups I lived through in Ghana …The safe detail that lingers, however, is of the martial music that consumed the radio, and then the TV, airwaves in the ensuing days. … Suffice to say that I have a visceral reaction to military strongmen and their rhetoric – I am blinded by the accompanying blood.

The martial music of our coups all had this alien, otherworldly aura – as if to remind the listener that the military in Africa were one of the most ruinous of our colonial inheritances.