THE ECONOMIC MELTDOWN AND NIGERIA 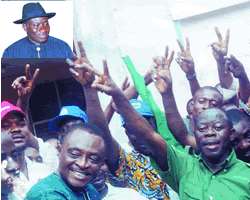 The biting effect of the global economic meltdown on the Nigerian economy and its implications on employment has been very devastating.

From the banking sector to the manufacturing, oil and gas, and the informal sectors, none is insulated from the problem. Most companies trying to find a way out, or around the logjam, have tried outright retrenchment, downsizing, rightsizing, outsourcing etc.

Comrade John Kolawole, the Secretary-General of the Trade Union Congress (TUC) gave more hindsight into the peculiarity of the meltdown to Nigeria. At the macro level, world's economy is usually classified as either developed or, underdeveloped. Notable developed countries are Britain, United States of America (USA), Germany, France, Japan and China, among others.

Nigeria is classified not only as underdeveloped, but placed among the world's poorest countries.

The current economic meltdown is not the making of the underdeveloped countries. The meltdown started as a US-mortgaged backed security crisis which degenerated into a full blown financial challenge. This resulted into a credit crisis with the refusal of banks to lend to generate production. Economic activities declined and unemployment grew. This local crisis adversely impacted on the global economy which triggered off a spiraling recession.

Nigeria, the past and present
Nigeria is not just an underdeveloped nation but it is classified as one of the poorest nations in the world. But the challenges facing her and other underdeveloped countries are many, none more crucial than achieving recognizable indices of development. These, no doubt, include the maintenance of law and order to protect lives and property by minimizing and resolving conflicts, food security, affordable housing, health care delivery, environmental protection, economic growth and a stable polity. In underdeveloped countries, resources are not optimally utilized and it is recognized by the disparity between the rich and the poor.

When the economic meltdown started, former governor of the Central Bank of Nigeria (CBN), Prof. Chukwuma Soludo, assured Nigerians that our economy and that of the banking or financial sectors were immune to the crisis.

The story has now changed and the truth let out of the bag. According to the new CBN boss, Mallam Sanusi Lamido Sanusi, the situation of Nigerian banks is very bad. He revealed that an audit conducted recently showed that, the 10 banks whose managements and boards were axed were:

• Indirectly giving loans to themselves through fronts;

• Doing insider trading;
• Capital market manipulation;
• Money laundering; and
• Recklessly spending banks' funds.
These are manifestations of some failure of law and its practitioners, characterized by lack of regulation and appropriate sanctions.

Nigeria's economy in the past decade
Maybe, the reason for the assuring statement that Nigeria's economy was untouchable can be deduced from the fact that our economy has been on its knees for over a decade. While it has been growing from bad to worse, defying all solutions, Nigerians have been 'suffering and smiling' 'through the years as if nothing was happening and we even earned the categorization as the happiest people on earth'.

All these while, infrastructure where they existed at all, broke down and not replaced, roads were turning to death traps, electricity deteriorated from epileptic supply to none at all in several areas, no good health care, falling standard of education, graduates roaming the streets, while the large army of unemployed grew. No social security; rising rate of insecurity; consequently, hunger, poverty and disease. Industries closed down, sending more into the unemployment market; inflation was running high because of mismatch between supply and demand. Multi-taxation joined all other factors mentioned earlier to encourage flight of industries to neighbouring countries, etc.

Reasons for past or present failures
We have mentioned earlier that the problem with Nigeria was the manifestations of some failure of law and its practitioners, US Secretary of State, Mrs. Hillary Clinton drove the point home more clearly. She noted that the immediate source of disconnect between Nigeria's wealth and the poverty was the failure of governance at the federal, state and local levels. She said: 'Africa does not need more strong men but good governance. With good governance, nothing can stop Nigeria. Oil cannot stop bad governance, but can provide basic infrastructure'.

All Nigerians are aware that corruption is mainly perpetrated by those in government. NEITI has shown that the Nigerian government does not know how much oil is produced and sold; neither does it know how much revenues accrue to the country from the sale of oil.

TUC believes that 'with common sense, anyone can see that there are problems in the domain of the ruling class and its friends. In the first place, they had created these problems to justify the establishment of a regime of deregulation which will finally place in their hands the all-important oil sector for capitalists to manipulate.

Solution.
Like in the developed countries, neo-liberalism has created a situation which captains of industry manipulated greedily to the detriment of the larger society. Regulation is key to the recovery of our economy.

Therefore, good governance or putting it more directly, the 'right leadership and policy' is important.

Deregulation is not key to our problem
Even the USA, the self-anointed leader of the free market and neo-liberal ideology, has found to its sadness that the best value is delivered to society through a regulated people-centred economic system. In the USA as in England and over much of Europe, governments are nationalizing leading private businesses and regulating various other conditions in the market.

With the above position, we declare our support for the actions being taken by Sanusi in the financial sector. We believe also that many Nigerians support any action that will sanitize governance and instil discipline. It is common to read statements such as 'it is a good development. It is the beginning of good things to come. It is better late than never. Financial institutions are key to any economy and should be well-regulated'.

'What Nigerians are asking for is good and strategic actions. In a statement the TUC released earlier, we pointed out that even in the face of reduced revenue from oil, the nation can be strengthened with incursions into the numerous resources lying untapped in Nigeria, tapping the abundant human resources for export, encouraging entrepreneurship, installation of a convenient tax regime and making capital available to the generality of Nigerians, especially in the informal sector or the small scale industries.

Employment
The recent employment summit recognized job or decent jobs as essential to development. In its Action Plan, the summit stated that beside the many commitments made by stakeholders, it placed 'decent employment opportunities at the centre of socio-economic development in Nigeria'. Opportunities for jobs were identified in various sectors of the economy.

Encouraging local production. It is a known fact that Nigeria's industrial sector is virtually non-existent anymore. The textile sub-sector has lost many mills; the same can be said of rubber, tyre and electrical equipment industries. The collapse of these vital industries in the private sector, has been traced to several reasons. Top on these are: – multiple taxation and high interest rate in the banks, poor infrastructure, low electricity supply, bad roads, among others.

These essential facilities are inevitable if our economy is to be nursed back to good health.

We need to pump in more money to stimulate economic recovery. Along with taking care of the above, money must be injected into the economy. The developed countries are doing it and our own renowned economist, Managing Director of the World Bank and former Finance Minister, Dr. (Mrs.) Ngozi Okonjo-Iweala, said sometimes ago that this is the time to release into the economy money saved during the oil boom era from our foreign reserves and other savings. It is a wise advice.