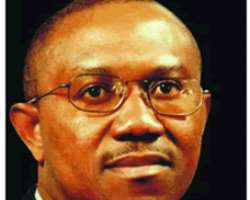 Gov. Obi
Governor Peter Obi of Anambra State has urged the presidency to award the contract of the Second Niger Bridge to the best contractors to avoid a situation where shoddy work would be done on the project.

'Let us ensure that only the best contractors are engaged for the project and avoid a situation where contractors like 'Obi and sons' or 'Dagash and sons' are given the contract,' he stated.

Obi expressed gratitude on the commitment of the federal government to the construction of a second Niger Bridge and the maintenance of the existing one. He said that that the bridge remained strategic not only to the South East geo-political zone but Nigeria as a whole considering that it is a gateway linking the south and northern parts of the country.

The governor who made the remarks while speaking with journalists in Awka stated that, 'the bridge is vital to the entire nation since it connects the country to the biggest Market in West Africa.'

When the Minister of Works, Senator Sanusi Dagash and his Minister of state visited Anambra, Gov Obi who spoke on behalf of his colleagues in the South East in his capacity as their chairman, had thanked the federal government on its renewed interest in the project.

Obi explained the project was necessary at this time given the possibility of the collapse of the existing bridge built over 45 years ago. He implored the federal government to drop the idea of the two affected states of Anambra and Delta contributing to the funding of the project urging the federal government to bear the responsibility considering that it is a federal road. He argued that involving the states would only delay the project unnecessarily. He regretted that after former President Olusegun Obasanjo went through the formality of flagging off the project though nothing had followed till date, with neither a contract being awarded nor a design done.

It will be recalled that the new Minister of Works, Senator Sanusi Dagash and his Minister of State, in their first official outing outside Abuja, endorsed the long-awaited construction of Niger Bridge by the Federal Government. According to the Minister during an assessment tour of the sites of the current and proposed bridges in Onitsha, Anambra State, the construction of the bridge was a project very dear to the Presidency and nothing would be spared to make it a reality.

The Minister who described the project as workable, economical and one that would restore confidence in the people, assured that only reputable contractors would be considered to handle it and that the entire process would be open and transparent. He said that the most economically effective solution would be adopted without fears over its financing. 'The process of dealing with this bridge will be very open and transparent and finance will not be an issue', Dagash stated, pointing out that it would however take time to be actualized.

Dagash also announced that the project would be built with the permanence as the operative word while the existing one would regularly be maintained. According to him, the federal government's interest in the project was occasioned by its national importance and one that would unite all Nigerians. Residents had stormed the current site of the bridge to protest the delay in commencing work on the project.