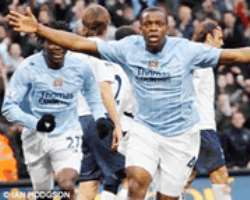 Onuoha
Carlos Tevez has been credited officially with the second goal in the Manchester City's 5-1 victory over Birmingham. Nedum Onuoha thought he had scored, but handed it over to the Argentina striker, who got a slight touch.

Now, the club asked to rule on the official scorer because the Premier League only steps into debates about possible own goals, has awarded the goal to Tevez.

It takes the former Old Trafford striker, Tevez, to 22 goals in the Premier League and at the heart of the hunt for the coveted Golden Boot, and 28 in all, his biggest-ever haul in a single campaign.

Meanwhile, Roberto Mancini wants his free-scoring Manchester City players to keep their foot on the pedal in the remaining five games of the Barclays Premier League season. It seems a straight fight between Mancini and Harry Redknapp for a coveted Champions League place and the former Inter Milan boss is up for the challenge.

'We know that it is vital we have a good goal difference because that could possibly decide who finishes in the fourth place,' Mancini told City's website.