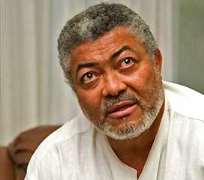 We are hearing from prominent people who are sick and tired of trying to change the culture of corruption from within, calling on Nigerians for Rawlings formula to save us. Unlike poor masses like us without clout, these are men of “timber and caliber”. May be the hungry masses or some Diaspora Nigerians targeting stones into the motherland are not that unreasonable after all. There must be something good to say about Sharia law.

Finally, the message may be getting through that their days are numbered. They smell that Igbo proverb that when an old woman hears about old bones, she feels the chills to the marrow. Some people never heed warnings until tsunami strikes. But we can be sure that a wise cripple will be gone by the time the war comes. We have begged them, gone on strike, gone to law courts; instead of listening to their conscience, they neutralize us.

Those students who were brutalized in their days, those intellectuals who were jailed, those workers fighting for their rights while mothers raised their children alone during all these struggles, only escape to come back and fight another day. But as long as they live and wherever they are, they will always be a thorn in your hedonic flesh. How can people who never made a decent living from their own sweat call others cowards?

If Nigeria has lived up to its potentials after Independence, no frivolous criticism can stick on sound reputation. As long as majority of Nigerians wallow in abject poverty where eighty percent of its citizens live below acceptable African standard, we will do the criticism ourselves before outsiders do it for us. Someone said if you want to get a Nobel Prize Award, criticize Nigeria, and foreigners will be glad to oblige you. So he did not get one because he loves Nigeria more!

If anyone is going to question our patriotism, our love and dedication to Nigeria that many died for, our blood spilled for during protests and demonstrations; no looter is qualified to label us. They are only serving their selfish interest. Most of them were on Federal, State and International scholarships in their days before they became looters and the military boys never got off welfare anyway. How dare, they question anyone?

Trying to save their neck from the guillotine, caution is ringing out from cronies who have independently since 1960 disoriented the land of farmers, herdsmen, hard labor, milk and honey into shadows of itself today. After 50 years, they still beg for time and caution so that they can die in their fat peacefully. Full belly tells the hungry to take heed. Only the masses, the dying men and women without relief or pension know the painful pinch of death.

There must be some good news to cheer about Nigeria apart from our soccer players. Though one of our scientists turned out to be a fake on cure for AIDs, other Nigerians can only do well in foreign laboratories. We had recent news about Nigerian made cars. That confirms the fact that we are only recycling old news. We are so desperate for good news; we recycle ingenuity that could have been encouraged and patronized in the right environment. Such arguments; over Awojobi's and Ezekiel Izuogu's cars, or Mubarak Abdullahi homemade helicopter from old car parts, only favor foreign made.

Since we can only distribute poverty by our status quo, Steven Fajemirokun had urged Nigerians to first create wealth before distribution. He never dreamed that Nigeria would make so much from oil revenue. People who are not afraid to achieve do not blame those who criticize them for failing to make the mark of excellence. Those who drain Nigeria of its talents want a few more years to do it as they get closer to graves so that they may have more to pass on unchallenged to their children. Looters for life!

It is not how much money we make but how we use it. Even if it is true that our per capita income is relatively low, that our foreign financial advisers do not wish us well, that they trained and educated us for unproductive ventures; those are not reasons we should pay our politicians the highest salary and allowance and travel all over the world so that they can teach us more nonsense.

We are also sick and tired of politicians lecturing us that the amount of money spent or what they learned while traveling abroad paid more dividends in terms of investments they attracted into the Country. If that is true since they have been saying it, Nigeria would have been bigger investment heaven today than United States plus China. Yet, the politicians are parroting their fathers' voice; at least failed Dubai has infrastructure.

Would they listen or care one bit now? We doubt it. We have been told that Nigerians do not trust their neighbors and would rather ally with fellow looters, no matter what. They understand our philosophy as similar to those of Republicans, that enough of us are not our brothers' keeper but we are full of dog eat dog mentality.

Since we cannot penetrate into the fortress our oppressors are hiding, we are now at a point where Nigerians are turning on one another. We kidnapped our very old and young. Our students are in cults demanding money for protection. Grandmothers and fathers are used as drug couriers. Our police make a decent living from common men and women on the streets by raiding and asking them to bail selves out.

There is no doubt that the common men and women who bear the lion share of the agony of the rot in our Country, who hardly have enough to drink or eat and believe opportunists that some Messiah will deliver us are the real heroes. They are certainly not those who cannot wait to get their biggest piece of the pie by contracts and head to foreign embassies for visa. They cannot wait to run out of the Country and squander it on frivolities and medical checkups they can easily provide in Nigeria.