Should It Take A Resignation Threat From Buhari For the Nigerian Senate To Screen Amaechi? 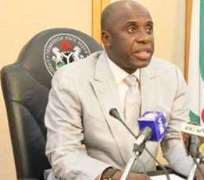 ‘Dear Senators, All I ask is for a chance to prove that I am capable of serving my country again, this time as a Minister of the Federal Republic of Nigeria under President Muhammadu Buhari. I am not even asking for BOW AND GO. A chance is all I'm really asking for, so give me one, and I promise to answer your questions openly before the Nigerian people’.

These could be the opening words by the ministerial nominee, Rotimi Chibuike Amaechi in regards to his delayed screening and confirmation hearing in the Senate.

For the third time in two weeks, the 8th Senate postponed the screening of the former Governor, Rotimi Amaechi of Rivers State, a former Chairman of the Nigeria Governors Forum, and the recent Director-General of Buhari presidential Campaign Organization.

In terms of commonsense psychology, it would not be far-fetched to say that in the Saraki Senate the delayed screening of Amaechi not once but twice, is nothing short of acts of repugnance, pettiness and immaturity.

Here in this discourse, it is essential to know that at the time of this writing this Psychologist has never met Amaechi personally or professionally, as such this writing is purely from the point of leadership discourse.

If the Senate war over Amaechi continues unduly, may be a possible threat from the President to resign his office could wake up the senate, and rally the Nigerian people over this risky play by the Senate.

If the this President was asked about this impasse, he is likely to tell Nigerians that he is not in any mood to play political games with the senate, the members of the Senate PDP caucus especially.

Certainly, the road to politics is tricky but what this Senate should understand is that it cannot justifiably convince the Nigerian people that it can stop the man, Amaechi who just two years ago was reportedly the first to foresee the victory of Buhari.

Buhari would then go on to become the first Nigerian to widely defeat a sitting President in an election. President Buhari appears to have deep and strong belief in Amaechi’s ability to take Nigeria into new heights; as such the President is ready for this fight.

The Senate knows all too well how Amaechi almost single handedly put together a Southern strategy to unseat President Goodluck Jonathan.

Buhari will make sure Amaechi’s nomination becomes a reality. Yes, Amaechi will go into history as that man along with other leaders, who completely dismantled Peoples Democratic Party (PDP), the once famous and biggest political party in Africa, as such the anger by the PDP senate minority members is understandable.

President Buhari, a Northerner realizes how this man Amaechi aggressively championed the defeat of a fellow ‘brother’ Jonathan from the Niger Delta.

So if the Senate wants to continue to fight Amaechi, it should know that Buhari is the one it is really at war with—a fight the Senate will lose miserably.

The Nigerian people will always remember Amaechi as the man who along with others drew a bright red line in the sand daring the PDP to stop the change that is coming to Nigeria through the Buhari presidency.

The Saraki Senate could reduce its shame by speaking with one voice, and immediately bring in Amaechi who by law will automatically be sworn in as a Minister following the expiration of the 21-day constitutional deadline.

In this respect, President Buhari does not need any form of resignation threat to the country for the Senate to do its constitutional job.

Amaechi in his own words about Buhari winning the presidency once stated, Buhari “will win,’ in the same vein, Amaechi will win, and become a Minister of the Federal Republic of Nigeria under President Buhari.

Dr. John Oshodi is a Florida-based Forensic/Clinical Psychologist, a specialist in Prison/Police/National Security matters and a former Secretary-General of the Nigeria Psychological Association. [email protected] ,drjohneoshodi.com