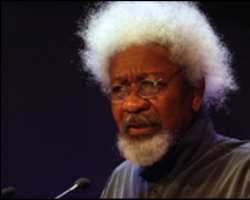 
“Where an officer has been absent from duty on the ground of ill-health for an aggregate period in excess of 42 calendar days within 12 calendar months, the officer should be made to appear before a medical board with a view to it being ascertained whether or not he or she should be invalidated from service,” What the Public Service rule says

President Umaru Musa Yar'Adua's failure to transfer power to Vice-President Goodluck Jonathan before proceeding on medical treatment in Saudi Arabia 49 days ago is the subject of a mass rally holding in Abuja tomorrow.

The rally, tagged "Enough is Enough", is being put together by the Save Nigeria Group and will be led by Nobel laureate, Prof. Wole Soyinka, former Kaduna State governor, Alhaji Balarabe Musa, and the Ikemba Nnewi, Dim Chukwuemeka Odumegwu-Ojukwu.

For the first time, a prominent Nigerian cleric will be part of a political mass rally, as Senior Pastor of the Later Rain Assembly, Pastor Tunde Bakare, is one of the leaders of the protest.
Also in the group are Mr. Solomon Asemota (SAN), Mallam Uba Sani, Mr. Olisa Agbakoba (SAN), Mallam Farouk Adamu, Hajiya Najatu Mohammed and Prof. Pat Utomi.

The protesters are billed to raise their voice against the "power vacuum" in the country, electoral reforms, corruption and the US blacklisting of Nigeria in its war against terror.

Also, the Senate will tomorrow discuss the prolonged absence of the President.

The Deputy Senate President, Mr. Ike Ekweremadu, spoke with journalists in Minna, Niger State, yesterday after paying a condolence visit to a former Head of State, Gen. Ibrahim Babangida, over the death of his wife, Maryam.

He said: “By Tuesday, the Senate will rise up to the occasion and take a decisive action over the continuous absence of the President. Nigerians should look out for what will happen and let's wait and see where the pendulum will swing.”

Meanwhile, for staying more than 42 days away from office within 12 calendar months on health grounds, President Yar'Adua may have violated a section of the Federal Government Public Service Rules.
Paragraph 070316, Chapter Seven of the Federal Government Public Service Rules 2006 provides that any officer on sick leave for more than 42 days within 12 calendar months must face a medical board to ascertain his physical suitability to remain in office.

“Where an officer has been absent from duty on the ground of ill-health for an aggregate period in excess of 42 calendar days within 12 calendar months, the officer should be made to appear before a medical board with a view to it being ascertained whether he or she should be invalidated from service,” the section reads.

Yar'Adua left office on November 23, 2009 for medical attention at the King Faisal Specialist Hospital in Jeddah, Saudi Arabia and has spent 49 days out of the country.

Paragraph 010101, Chapter One of the same rules says that the rules are applicable to the President, Vice-President, Chief Justice of Nigeria and other public officers who derive their appointment from the constitution.

Frontline lawyer, Falana, who spoke to THISDAY on the development, said it was misleading for anyone to give the impression that the President or anyone for that matter could abstain from work for that long on medical vacation without time limits.

He said such situation is only feasible in the event that there is a conflict between the rules and the constitution, a development he described as non-existent in this particular case.

“It is applicable to everyone in this category who derives his appointment from the constitution to the extent that the rules are not inconsistent with the provisions of the constitution,” he said.