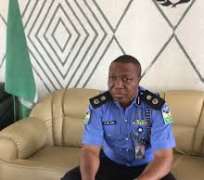 I have decided to lend my voice on the on-going imbroglio between the Ogun State Government and their State Police Command on one hand, and a blogger, Mr. Emmanuel Ojo on the other hand.

According to the story, the blogger was arrested on Saturday the 26th of September 2015 by Police Officers of Ogun State Police Command after trailing him. He was reportedly first held at Ibara police station Abeokuta, but later moved to the Command Headquarters at Eleweran, Abeokuta; where he underwent interrogation before being charged to court on Monday the 28th of September 2015.

Mr. Emmanuel Ojo (The Blogger) was granted bail, after the police prosecutor had pleaded fruitlessly with the Judge to deny him bail, strenuously claiming that he was a “dangerous criminal”. Now, the allegation against Mr. Emmanuel Ojo is that he published a story months back both on his facebook and on his blog that Ogun state governor’s wife, Mrs. Olufunso Amosun was arrested in London by the Metropolitan Police for being in possession of 300,000 pounds and grilled for Money laundering.

The matter is already in court, so commenting on it may attract “contempt of court”. Nevertheless, my interest in this matter is the involvement of the Ogun State Police Command led by C.P Abdulmajid Ali over this case. This is a straight forward matter. If the wife of Governor Ibikunle Amosun felt injured by the publication that was done many months ago, exposing her alleged involvement in money laundering, she should have approached the courts and sued for libel and defamation, unfortunately, she did not do that, rather, she resorted to use the police through the influence of her husband’s led government, to intimidate the said blogger, Mr. Emmanuel Ojo. The woman did not even deny or refute the allegation, months back when the supposed publication was made. She waited until perhaps, the blogger, Emmanuel Ojo was arrested months later before she found her voice to “refute” the allegation.

According to the Police Public Relations Officer of the state Police Command, Mr. Muyiwa Adejobi, the blogger was arrested by the Police after it received a complaint from Ogun State Government noting that “We are still conducting our investigation and if he is found wanting, he will be charged to court accordingly”. Again, the Secretary to the State Government, Mr. Taiwo Adeoluwa noted that “The report by the blogger on the first lady is false and calculated to rubbish her image. The governor is not connected with the arrest of the blogger”.

The question now is; how did the police conduct investigation within 48 hrs of the blogger’s arrest? How come they charged him to court without finding him “wanting”? Did the Ogun State Police Command contact the Metropolitan Police in London within the said 48 hrs of the blogger’s arrest, to find out if indeed the governor’s wife was or was not arrested for money laundering?.

The truth is that the Ogun State Police did not do any of such investigation but frivolously and foolishly relied on the rubbish instruction and information given to them by the Ogun State government through the Secretary to the State Government (SSG), Mr. Taiwo Adeoluwa that it was a “false allegation”.

It is just obvious that the Ogun State Police has provided itself as a platform to be used to intimidate people who are bold enough to expose corruption in that state. This is the crux of the matter and this is where the so called Police commissioner, Mr. Abdulmajid Ali comes in. I know him as an incompetent and shameless police officer who is always reportedly dancing to the useless “BONGO-MUSIC” of every corrupt state governor and speakers of State Houses of Assembly to witch hunt activities of bloggers, internet writers, activists and social crusaders who expose crime and criminality in the society. Abdulamajid Ali is a very corrupt Commissioner of Police. He cannot claim ignorance of the arrest of the blogger, Mr. Emmanuel Ojo.

The reading public will now be asking what Citizen Ikenna Samuelson is driving at!!!

Abdumajid Ali was the notorious Commissioner of Police in Imo State who connived with the very corrupt and disgraced ex-Speaker of Imo State House of Assembly, Mr. Benjamin Uwajumogu and Imo State Government led by Governor Rochas Okorocha to accuse me and my wife of the murder of Architect Franklin Okoli, after they failed to assassinate me on that same day, 3rd June 2014. Investigations were carried out, and it was confirmed that Okorocha, Uwajumogu and their cohorts sent people (5 boys) to come and kill me, but when the plot failed due to my absence at home on that very day of execution (3/6/2014), the five boys were instructed to kill anybody within my compound; with the assurance that the police would be called in to arrest me and members of my household. In a security meeting held at Government House Owerri on the 5th June 2014, the names of the five boys who killed Architect Franklin Okoli were submitted. Representatives of all the security agencies in Imo State attended that meeting and they have the names of those five boys. But as shameless as he is, the then Commissioner of Police (Abdulmajid Ali) refused to arrest the five boys, obviously obeying the instruction of Governor Okorocha and Uwajumogu not to arrest them, because arresting them would have exposed the Imo State government.

The family of the murdered Franklin Okoli even came to the Imo State Police Command Headquarters and requested for my release and that of my wife, stating clearly that we did not kill their son. They even swore to an affidavit, demanding our release. The family also demanded that the then Commissioner of Police, Mr. Abdulmajid Ali should arrest the killers of their son, whose names were submitted at the security meeting at Government House on the 5th of June 2014. But the fool and “Big for Nothing “ Abdulmajid Ali refused, perhaps because he collected money from both Uwajumogu and Okorocha; and acting on their orders, my wife and I were charged to court on the 7th of August 2014. We were remanded in Prison custody at Owerri Federal Prisons, in order to divert attention from the real issues. The story is well known to the public and need not to be repeated here again.

At this point, let me appeal to the Force Headquarters and the Police Service Commission to check this desecration of the Nigerian Police Force by the likes of Abdulmajid Ali (08033104650). This incompetent Police Officer should not be allowed to continue to assault, insult and attack the sensitivities of the people. He should be dismissed without further delay. A petition for his dismissal was submitted to the Police Service Commission and Force Headquarters in June 2014; I therefore wonder why this man has been allowed to continue to dent the image of police and embarrass the Force Headquarters with his rubber-stamp behavior towards fighting crime.

As for the blogger, Mr. Emmanuel Ojo, I appeal to him to be courageous and never to be afraid of anybody or feel intimidated, as long as he is writing and publishing the truth. His arraignment in court was only meant to intimidate, frighten and cow him into recoiling in his timidity and finally divert attention from the real issues. He should not be afraid, rather he should go ahead and expose corruption in Ogun state.

I am therefore calling on other bloggers, crusaders, activists, internet writers and publishers in this country to start investigation on the activities of Governor Ibikunle Amosun of Ogun State, his wife Olufunso, Ogun State Government and of course the Ogun State Police command. I strongly believe there are lots of things they do not want the public to know, hence this intimidation of Emmanuel Ojo, using the Ogun State Police command led by an incompetent police officer as Commissioner.

I ask again; Abdulmajid Ali, what manner of Police Commissioner?