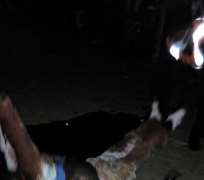 National Emergency Management Agency (NEMA) has put the number of the dead in both Nyanyan and Kuje, Abuja bombings at 15.

The agency also said 41 other persons were injured in the coordinated attacks that were carried out by suspected members of the Boko Haram.

A statement by the agency's spokesperson, Sani Datti, in the early hours of Saturday in Abuja said, "Following a coordinated rescue operation at scene of multiple explosions in both Nyaya and Kuje, which are satellite towns of Federal Capital Territory Abuja, so far fifteen (15) persons lost their lives and forty one (41) injured were evacuated to Nyanya, Asokoro General hospitals and National Hospital Abuja.

"In Nyaya Two (2) deaths were recorded while 21 injured. Kuje thirteen (13) person lost their lives and 20 injured.

The casualty figures given, however, is at variance with eye-witness account from the scene of the attack. A relative of a dead person, Ibrahim, told our reporter earlier today that at least 20 people died in Kuje market alone while over 40 people were injured.