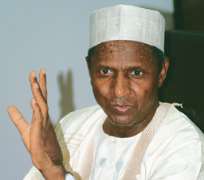 Former President Olusegun Obasanjo and some of his key associates have gone underground to ward off reported scrutiny by security officials which heightened penultimate week after a key opposition figure and a minister in the Obasanjo cabinet, Mallam Nasir el-Rufai announced the deferment of an earlier and well-publicised plan to return to Nigeria on December 27, 2009.

Security agents are reportedly on the trail of the former president and some of his key associates over suspicion that they may have been oiling some opposition groups to destabilize the wobbly Yar'Adua administration.

Apart from Obasanjo, other key officials in the previous administration reportedly under watch are its minister of aviation, Chief Femi Fani-Kayode , his colleague in the finance ministry, Mrs. Esther Nenadi Usman and a former minister of defence (Navy) Alhaji Lawal Batagarawa,. The source also confirmed that “red alert” has been placed on a former chairman of the Economic and Financial Crimes Commission, Mallam Nuhu Ribadu and a former presidential spokesman, Mallam Uba Sani, but could not readily confirm if former presidential aide, Dr. Andy Uba also made the watch list.

A former minister of the Federal Capital Territory Administration, el-Rufai has sustained a running battle with the National Assembly and several agencies of government since Yar'Adua took over in May 2007. A grating critic of the Yar'Adua administration, el-Rufai has just completed a programme in Harvard, and had late last year fussed about returning to Nigeria “to continue the pursuit of the raft of cases I have instituted in the courts against the government.

Indications to the effect played out Wednesday when Obasanjo refused to be led into commenting on Yar'Adua's protracted absence and the recent blacklisting of Nigeria by the United States of America following the unsuccessful attempt by a Nigerian to blow up a US airliner last Christmas.

Confronted by journalists at the Murtala Mohammed International airport, Lagos, over his reaction on the two burning issues, Obasanjo who had just returned from a brief trip to some West African countries instead parried the questions with intermittent claps.

It took the death of the late maximum ruler, General Sani Abacha to save Obasanjo's neck from the hangman's noose, after he was convicted for what is widely believed was a phantom coup. It was Abacha's successor, General Abdulsalami Abubakar that released Obasanjo from prison.

Security sources hinted that they were tickled by what they said was the “bravado” of certain key elements in the Obasanjo administration, particularly el-Rufai and Ribadu, “suggesting that they are relying on something, which is what we seek to uncover.”

“In sha Allah, trusting in the benevolence of Allah and the goodwill and prayers of the people of Nigeria…we shall once again overcome tyranny as we seek to entrench democracy and results-oriented governance”, el-Rufai boasted in a statement entitled “Letter to Dear Friends and Family.”

On December 22 nd, 2009, however, citing security reasons, el-Rufai announced a deferral of his planned return, reportedly throwing spanner in the works of Nigerian security agencies that Pointblanknews.com gathered, “were poised for a showdown not minding the consequences.”

According to top security sources, el-Rufai was “fortunate” to have backpedalled at the “11 th hour”, since, according to him, arrangements had been concluded to “take him in” and other “elements” believed to have strong links with Obasanjo.

One of the sources told Pointblanknews.com that decision to place key officials of the Obasanjo administration under “eagle eye watch” was arrived at following the conviction that there were “highly coordinated moves” by el-Rufai and Ribadu to incite Nigerians and the international community against the Yar'Adua administration.

The moves, the source offered, included but was not restricted to campaigns in the local and international media and other subversive activities which he refused to elaborate on.

When contacted for comments on whether he considered his activities a threat to national security, a former minister from the North reportedly on the watch list, scoffed.

“In Yar'Adua's Nigeria, anything is possible. An administration that deceived Nigerians with the ruse of law and broken promises of a seven-point cannot but be desperate. Yar'Adua promised promised 10,000 MW of power by December, 2009, but later scaled it down to 6000MW. Even at that, this is January 2010, and they don't have 3000 MW. It therefore follows that it is pointless talking about the 30,000MW they promised by 2011 and 50,000MW by 2015,” said the former minister.

He disclosed that he had to close his email address following what he said we junk mails from persons posing as military officers and urging him and “the other comrades to move to save Nigeria from the hands of an inept and now terminally ill Yar'Adua.”

He said: “My brother, what you are saying may not be far from the truth. I had been wondering how Lt. Colonels, Majors and Lieutenants got my email address. When I discussed with one of my former colleagues, he confirmed getting similar emails. It was at this point it became clear that there must be a grand plot to nail some of us.”

The former minister said they couldn't be “too careful” given what he said was the deportation of a key opposition figure in the Second Republic, Alhaji Shugaba Darman by the Shehu Shagari administration, and the phantom coup during the era of the Late General Sani Abacha.

The former minister said the botched power probe, that involving the sale of Federal Government houses, investigation into the utilization of the N19 billion aviation fund by the National Assembly were all calculated at “keeping Obasanjo and his men out of circulation for as long as possible.”

He accused a former Secretary to the Government of the Federation (SGF), Ambassador Baba-Gana Kingibe of masterminding the plethora of probes into the stewardship of key Obasanjo men, and the “stationing of EFCC to sensationalise the cases using sections of the Nigerian media.”

He quizzed: “If the EFCC had put in a fraction of the vigour with which they are hunting Obasanjo, Ribadu, el-Rufai, Femi (Fani-Kayode) and others into the Ibori case, they would at least been able to sustain at least one of the 150 count charges which could not stand in a kangaroo court.”

However, security sources insist that they would not relent in the pursuit of “these elements of destabilization.” One of them confirmed the Yar'Adua administration was unsettled by the string of interviews el-Rufai and Ribadu have been granting to the media, particularly the ones granted by the former to Financial Times and Thisday newspapers.

“It is clear that Yar'Adua has made a Faustian bargain - to embrace corrupt people and criminalize those that are honest. Look around and take a roll call - Umaru is more comfortable surrounded by convicted felons, career criminals, smugglers, bribe-takers and dodgy lawyers. These are notorious facts that do not need an El-Rufai to state,” the former minister said in a recent interview with Thisday newspaper