License Round Announcements and Updates at the 22nd Africa Oil Week 2015, Cape Town 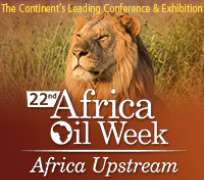 This meeting commands unique global reputation as the most important in or on Africa, with 120+ Speakers, 150 + Exhibitors, 40+ Governments - and with over 30+ African National Oil Companies, plus official licensing agencies, and over 1,000+ key senior oil and gas industry executives and state oil officials from across or involved in Africa, currently confirmed to attend.

Congo License Round 2016: HE Jean-Marc Thystere Tchicaya, Ministre des Hydrocarbures de la République du Congo supported by PGS, will make a keynote presentation and open the 2016 Licence Round and will host the Congo Roadshow during the Africa Oil Week with Ministerial, DGH and SNPC Delegations in attendance, and supported by PGS.

Gabon License Round Announcement: HE Etienne Dieudonne Ngoubou, Minister of Petroleum and Hydrocarbons, Gabon will be announcing the Gabon Deepwater License Round 2016. The Minister will be at the 22nd Africa Oil Week, with the Government Delegation in attendance, supported by CGG.

INP: Carlos Zacarais, Chairman, Instituto Nacional do Petroleo (INP), Mocambique, is confirmed to present at the 22nd Africa Oil Week, with an INP delegation present and also participating in the exhibition.

Kenya: The Ministry of Energy, Kenya, will be in attendance to present plans for future licensing.

Morocco: Onhym will be presenting and has confirmed presence at the Exhibition