Who Hates The National Stadium In Lagos? 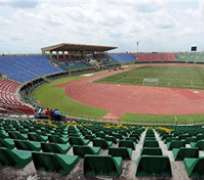 Date was sometime in the later months of 1973. Nigeria had just won the Gold Medal earlier in the year when the newly-constructed National Stadium in Surulere area of Lagos played host to the second edition of the All Africa Games....a huge carnival which no electronic medium in Nigeria feels worthy of being reported these days!

As lively primary school pupils bathed in enthusiasm, we also memorized and sang on demand, the official song of the Games.....especially the beautiful chorus:

Then in Primary Five, I, in company of friends would trek from the precincts of Isale -Eko on Lagos Island, across the Old Carter Bridge...marvelling at the aquatic splendour of the lagoon beneath us...and the fishermen atop canoes as they skillfully tossed their nets into water in anticipation of a bountiful catch.

At the Iddo end of the bridge, we would turn left, via Ijora Oloye, then Ijora Olopa, right towards Costain, then another left-turn to bring us into alignment with Western Avenue...past Iponri, then, Alaka and finally, "Stadium"!

As security men often prevented out riotous group from accessing the stadium through the main gate, we would retrace our steps back to Alaka to sneak under the wire fence via the back-ends of the stadium next to the swamps! Our main purpose...just to watch the "Eagles" in training...

During rest periods, the players would take time to exchange banters with us. Peter Fregene even gave us head rubs!

And if the Eagles were not in training, there would always be some games going on in the Indoor Sports Hall...table tennis, basketball, badminton...

We would also seize upon such opportunities to explore the main bowl....its cherry-red tracks in its sheer opulence...the swimming pavilion....

On other days if it suited our whim, we would turn in the direction of Obalende Police Barracks to enjoy its Sports Grounds.....weightlifters in practice....football clubs in practice.... schools' inter-house sports....especially the invitational relays!

The National Stadium in its glorious days, also played host to the African cup of nations in 1980 and 2000. It equally hosted the Under-20 FIFA World Cup in 1999. Footballers like Segun Odegbami, Muda Lawal, Sylvanus Okpalla, Patrick Ekeji, Adokie Amesiemaka and later, Rashidi Yekini played their best matches in that stadium.

Sheer selfishness led its managers to rent it out severally, for Christian crusades while barring our local clubs from playing there... As far as such managers are concerned, fees payed by organizers of such crusades must take precedence over sports development... the primary purpose for which the facility was built. Of course, such users would trample on the turf and generally "shit around"!

The sheer governmental irresponsibility of so abandoning the National Stadium in Lagos leading to such deterioration of these days....is to say the least, stultifying....