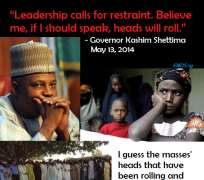 Once again the Nigerian army, this time under a new central government, has ridiculed Nigeria and its battle for sensible safety and the restoration of reasonable security. The Press statement by the Acting Director, Army Public Relations, Colonel Sani Usman on September 26th casually indicted Borno and other northeast leaders in Boko Haram crisis but stopped short of exposing and responsibly arresting the suspects.

In the process, rather than solving a most deadly and complicated crisis that has already gone on far too long, the army further conflagrated the situation by ostracizing and alienating local support. Though the army is under immense pressure to reach its important deadlines, there is the need for professionalism and responsibility. We cannot win the war on terror with the alienation of the locals.

The Press statement caused Borno Elders of Thought, BELT to complain loudly. In response, the army had to release another statement exonerating this singular group and leaving all other leaders as public suspects. The question to ask is, must each group of leaders complain serially to receive their public exoneration? The recklessness of the army position becomes obvious. If the Nigerian army wishes to caution individuals or groups, it should either arrest them, or if the evidence is not yet sufficient, call them privately to a meeting and discuss with them and sound off the necessary caution without carelessly castigating all groups publicly. Ideally the particular groups or individuals involved should have been immediately detained and interrogated, be they peasants or governors. In organized countries across the world, people are interrogated for mere inciting posts on the social media.

As pertains to the indictment of northeastern elders in Boko Haram crisis, the public Press statement triggers the obvious exigent and angry questions in minds of intelligent Nigerians: who are the suspects? Why are they not arrested? Are they warned and not arrested because they have immunity? Is there a constitutional immunity provision for terrorists and terror sponsors and facilitators? What are the stipulations of the Nigerian and global anti-terror acts for individuals or groups responsible for promoting terror? Are the implicated included in the suspects former president Jonathan hinted and concealed? Are they the people the governor of Borno, Kashim Shettima said he knew were behind Boko Haram but he was protecting their heads from rolling because he was "restraining himself?" Has Shettima been interrogated and forced to spill the beans? Is he to be relieved of his office for concealing these "untouchables" sponsors the army now also knows, over the years?

And then, what is the benefit from Boko Haram that massacres all communities in Borno and burns all homes, that the suspects enjoy as the army indicated? Is the benefit the "security vote" the northeast receives? Is the benefit the hope of taking over the land of the farmers for cheap and buying-up the abandoned homes in Maiduguri as some Borno leaders have been accused of? Are they being paid by Boko Haram?

Importantly, we also ask: are these suspect leaders being blackmailed by Boko Haram on threat of death to them and theirs to force them to publicly support and canvas for the terrorists?

Unquestionably, either of these questions and scenarios and the many more possibilities will demand a different, urgent and serious response by the Nigerian army; a response that a public press statement radically fails to provide. But the first thing the army must do so we know we are out of the sickening and blood 'sharing' Jonathan era where the government stood accused of aiding and abetting Boko Haram by concealing the sponsors, is to come correct. We did not fight for "change" for things to stay the same.