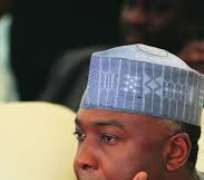 The election of Muhammadu Buhari on March 28, 2015 came with much hope. The euphoria continued to breeze until June 9, 2015.

June 9 was the day Bukola Abubakar Saraki emerged the President of Nigeria’s Senate. Since then, the masses have continued to yearn endlessly for meaningful change in their well-being. But the major changes witnessed thus far from the Legislature have been different shades of controversies—all bordering on the venal travails of Bukola Saraki.

The drama began to unfold when Saraki confessed he was able to assume the exalted position by disguising himself to upstage the party that brought him to power. As if that was not enough, the Nigerian Police declared that the Standing Order used to elect him to the leadership of the law-making body was forged. While the Ministry of Justice was reviewing the police report, another bomb shell erupted: The wife of the Senate President was charged by the Economic and Financial Crimes Commission (EFCC) for corruption and money laundering. In utter show of supremacy, the Saraki-led Senate was set to tame the EFCC by stoking the most infantile form of vindictive impunity. The law-making body brashly violated its Standing Rules in a hasty attempt to probe the anti-graft body on alleged diversion of funds recovered from corrupt people and, in the process, put Buhari’s war against corruption in disrepute.

But the fire in the molds of smoke beclouding Bukola Saraki is no longer in doubt. The Nigeria’s Code of Conduct Bureau has revealed that the Senate President had falsified the declaration of his assets as a governor a decade earlier. Accordingly, he was invited to the Code of Conduct Tribunal to clear himself of any wrongdoing. Instead of responding in a civilized and democratic manner befitting a chief lawmaker of a country, Saraki engaged in series of clandestine schemes to obstruct justice.

Though he would finally surrender to the authorities after being declared wanted, his attitude in the court house has given a black eye to Nigeria’s Legislature. Worst still, an asinine entourage of about legislators, most of who are equally guilty of all sorts of corrupt practices, exhibited unprecedented show of shame by accosting Saraki with pomp and pageantry to the tribunal.

Clearly, the whole Saraki saga is no longer funny. The matter has become a serious threat not only to the much anticipated change under President Buhari but also the nascent democracy. Something has to give. It is either Nigeria gives in or Saraki gives in. But nonsense must give way to common sense. It is time the Senate President recognizes that his current maneuver against the masses is an exercise in futility. It is time to consider nation before self and quietly go away.

Of course, Saraki has an army of stooges whose argument revolves around the archaic cliché: presumed innocent until proven guilty. However, they should be able to discern that law and leadership are two different things. Nigeria cannot afford to allow its war on corruption to be undermined—at the cruelest expense of the masses—all in name of borrowed theories. It is rather mystifying that the strict interpretation of the rule of law is only sacrosanct in Nigeria when it advances criminal ingenuity in favour of those in position of power. The current change movement must not allow one person to hold the country hostage with legal moonwalk. Nigeria is more than one man. Besides, Bukola Saraki is not the first public official accused of wrongdoing but opted to place nation before self.

The House of Representatives also promoted nation before self. Salisu Buhari was the first Speaker of the Lower House in 1999. Similar to Saraki, Salisu Buhari played a measurable role in his party before it gained power. Nonetheless, the speaker was relieved of his position less than two months after assuming office due to accusations of forging university certificate and false declaration of age. Patricia Etteh made history when she became the first female speaker in 2007. Muddled with claims that she authorized huge sum of money to renovate her official residence, Etteh stepped down less than five months on seat.

Perhaps Nigeria is not the only country where public office holders have stepped aside while they are being proven innocent or guilty. A cursory look at United States of America, a nation commonly viewed as a model democracy, helps make this case.

Jim Wright, US Speaker of the House of Representatives, was one of the most humble Congressmen ever to grace the Capitol Hill. However, he swiftly resigned from the Congress in 1989 when he became the target of a probe. What is the offense? Wright was accused of using bulk of the funds raised from his own book to earn speaking royalties in excess of the maximum amount allowed under law. Not long after, Newt Gingrich ceased from being the House Speaker in 1998 mainly because he was reprimanded for mere ethics violation. That was the same story for Tom DeLay, the Majority Leader of US House of Representatives. DeLay stepped down from his position in 2005 following a House indictment and the cloud emanating from charges of illegal campaign funds.

It is worthy of note, however, that some of the public officials cited above—both from Nigeria and the United States—were later acquitted of the charges and went on to enjoy decent political future. Nigeria’s Chuba Okadigbo, for instance, ran for president not long after—before serving as the running mate to Muhammadu Buhari in the presidential election of 2003. Former Speaker Salisu Buhari recovered to become a member of Governing Council of University of Nigeria by 2013. Similarly, former US Speaker Gingrich eventually redeemed himself to emerge the leading Republican presidential candidate in 2012 before dropping out due to new revelations of unethical behaviours.

Bukola Saraki still has a bright future ahead of him. But that future depends on how he handles the moment. The moment calls on him to realize that the ‘clean hands’ maxim readily holds in the doctrine of equity. The point is that Senator Saraki no longer has the moral grandeur and audacity to head a Legislature vested to lead the war against corruption. Considering that societal virtue is the litmus test for Buhari’s political appointments, how plausible is it for the Senate President to look the prospective ministers in the eye during screening? The thought or sight of such phenomenon has failed to register.

Expecting Bukola Saraki to go away quietly is nothing but wishful thinking. His inordinate ambition has already placed his political party in shambles. Moreover, he has failed since June 9 to heed private as well as public calls to resign honourably. In short, it has become abundantly clear that Saraki does not give a hoot about what becomes of Nigeria insofar he clings on to the post of Senate President. Thus, it is incumbent upon the Senate of the Federal Republic of Nigeria to do the needful and remedy the fast fading image of the legislative body. The time is now to initiate the necessary proceedings to impeach without delay Dr.Olubukola Abubakar Saraki as the President of Nigeria’s Senate before things get out of hands.

It is definitely a herculean task for the 8th Senate to willingly impeach Mr. Saraki, especially having passed a hasty vote of confidence on the same beleaguered leader during this ordeal. At the same time, there is the need for the senators to bear in mind that it is no longer business as usual. Nigerian masses are no longer helpless. The change movement that brought Buhari to power remains a potent force. The world is closely watching the current posture where the Hallowed Chamber is widely seen as aiding and abating corrupt practices.

*Ogbonnia, a leadership scholar, is the Chairman of First Texas Energy Corporation