2009 Hajj: Another success story for NAHCON 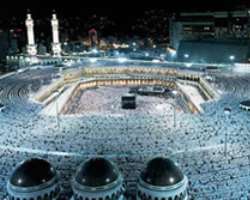 The 2009 Hajj exercise for Nigerians which commenced on 24th October, 2009 and ended on 26th December, 2009 has come and gone but its memories remain in the minds of the pilgrims and hajj operators in the country.

Until 2006, hajj administration had proved a herculean task and Nigerian pilgrims had tales of woes at the end of each hajj season before the establishment of the National Hajj Commission of Nigeria (NAHCON), the national body saddled with the responsibility of managing hajj affairs in the country.

The just concluded hajj operation is the third for NAHCON. It could best be described as the most hitch-free operation for Nigeria in the last decade. How soon hajj management in Nigeria has begun to compete with advanced countries in this respect is worthy of commendation and more support from all relevant groups and authorities in the country. It also poses greater challenges for NAHCON members and staff who have proved themselves as patriots in the service of the nation and the Muslim Ummah.

We, therefore, must continue to pray and hope that the Almighty Allah continue to grant the management of NAHCON the wisdom, strength and dynamism it needs in assisting Nigerian Muslims attain the best of the most rewarding one-time-in-life religious rite.

In order to appreciate the new dawn in hajj management, it is significant to x-ray the activities of hajj operation in 2009 from the preparatory stage to 26th December when the last batch of the pilgrims comprising Zamfara, Kano and NAHCON officials departed King Abdul-Aziz International Airport back home.

One of the outstanding findings in the last exercise was that the out-bound journeys to Saudi were for the first time concluded many days before the closure of the Jeddah airport. The strict compliance to flight schedules by the airlines yielded greater results for NAHCON and the pilgrims themselves. For NAHCON, it assisted in planning the easy home-bound trips as it received over 60 percent of the pilgrims in Medina before Arafat. For the pilgrims, it afforded a larger percentage of them to stay in Medina for the eight days many of them believe is necessary in order to be able to offer forty obligatory prayers in the Mosque of Prophet Muhammad (SAW).

The home-bound journeys, despite the heavy traffic at the Jeddah Airport, were concluded on the schedule. Max Air formerly Mangal Airlines was a colossus in the 2009 hajj and therefore is worthy of commendation.

A critical review of the 2009 hajj links the success to several factors which could become models in the administration of other national bodies. I personally feel that the cooperation among the trio of NAHCON, the Airlines and State Muslim Pilgrims' Welfare Boards/Agencies made this great success. NAHCON has, consistently, made its guiding principles timeliness and dedication. The Commission is of time an autonomous corporate establishment that has the whole time of the year to itself to plan and carry out the activities which used to be discharged within two to three months by ad-hoc committees formerly constituted every year during hajj operations.

Again, there can be no gainsaying the fact, as events have proved, that the Commission is overseen by the right citizens. This can further be supported by the fact that past efforts to stabilize hajj administration in the country failed despite the time, funds and human resources that were put in place. From the view of an insider, the management and staff of the Commission have displayed the highest level of responsibility and patriotism in the service of the Nigerian pilgrim.

Also important to reckon is the tremendous support the Presidency has accorded NAHCON. On the other hand, all the relevant Ministries, government agencies and religious bodies including Finance, Aviation, Interior, Foreign Affairs, Health, Central Bank of Nigeria (CBN), Jama'atu Nasril Islam (JNI) and Nigeria Supreme Council for Islamic Affairs (NSCIA), among others, have given the Commission the necessary support that manifested in the recent outing. The Senate and House Committees on Foreign Affairs have done their best too.

Above all, NAHCON began early arrangements. It held a preparatory meeting with all the State Muslim Pilgrims' Boards/Agencies, made pre-hajj visits to the Kingdom of Saudi Arabia to secure accommodations for the pilgrims and concluded all contractual agreements including airlift of pilgrims. It distributed its 85,000 ordinary hajj slots to States and the 10,000 slots to tour operators, announced the hajj fares and made adequate arrangements with the Nigerian Immigration Service and the State Pilgrims' Welfare Boards and Agencies across the nation for the e-passport and processed the issuance of hajj visas to the intending pilgrims in good times.

The vaccines against CSM, yellow fever and precautionary measures against the new H1N1 pandemic (popularly called Swine-flu) were carried out while aggressive pilgrims' enlightenment were equally undertaken with all seriousness. It constituted the Federal Medical Team (FMT) and a committee on Hajj women matters, among others.

All these efforts yielded positive results in many aspects. Nigerian pilgrims both at the eleven departure zones in the country and in the Holy Land, with the exception of few minor cases, were quite cooperative. The memorable stay in Medina, Makkah, Mina and the Arafat outing would ever remain in the minds of the 2009 Nigerian pilgrims.

Due to the early and adequate preparations and successful operations, many sectors in hajj affairs in the Kingdom of Saudi Arabia, more than ever before, displayed the highest sense of commitment and responsibility towards the Nigerian pilgrims. Some of them have already commended the tremendous changes going on in hajj affairs in Nigeria.

The Sultan of Sokoto, Alhaji Abubakar Saad 111, in an outburst of happiness with the 2009 hajj, has commended NAHCON, its management and interest groups for a wonderful exercise.

It is evident that NAHCON has proved it mettle in three consecutive years of successful hajj operations. It cannot, therefore, be far the fact that the expectations by the Nigerian pilgrims in 2010 exercise would be more challenging. However, it is wished that early preparations, proper funding, staff motivation and cooperation among all interest groups would determine the next level of success.