By Office Of Former Minister Of Finance, Federal Republic Of Nigeria 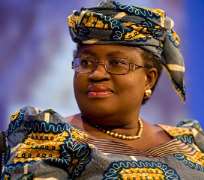 *ELECTED CHAIR OF THE BOARD OF GAVI, A $12 BILLION MULTILATERAL PUBLIC-PRIVATE PARTNERSHIP ON VACCINES

*EX MINISTER THANKS NIGERIANS AND INTERNATIONAL COMMUNITY FOR SUPPORT

The first is to serve as Chair of the 28-member Board of the Global Alliance for Vaccines and Immunisation, GAVI, ( http://www.gavi.org/about/ ), an international public-private partnership committed to saving the lives of children and protecting people’s health by improving access to immunization in developing countries, including Nigeria.

Dr Okonjo-Iweala was elected to the position after a competitive international search process.

GAVI is a $12 billion multilateral partnership which disburses grants of upwards of $1.8 billion annually to developing countries for immunization programmes.

GAVI is funded by governments of Australia, Brazil, Canada, Denmark, France, Germany, India, Ireland, Italy, Japan, the Kingdom of Saudi Arabia, Luxembourg, the Netherlands, Norway, the People’s Republic of China, Republic of Korea, Russia, South Africa, Spain, the State of Qatar, the Sultanate of Oman, Sweden, United Kingdom, and the United States as well as the European Commission, the OPEC Fund for International Development (OFID) and other institutional and corporate partners.

It will be recalled that, from 2000-2015, GAVI disbursed $425m in grants to Nigeria, an average of about $30m per annum for vaccination and immunization of children, including polio vaccines.

Dr Okonjo-Iweala succeeds Dagfinn Høybråten, a former Norwegian Minister of Health and current Secretary General of the Nordic Council of Ministers as Chair of GAVI.

In the second appointment, the former Managing Director of the World Bank has also joined the highly respected 167-year-old global investment firm, Lazard ( https://www.lazard.com/ ) as Senior Advisor. Her focus will be sovereign advisory.

“We are proud to welcome Dr. Okonjo-Iweala as a Senior Advisor to our world-leading sovereign advisory group,” said Matthieu Pigasse, Global Head of M&A and Sovereign Advisory of Lazard. “She will bring a unique international expertise and experience that will benefit both our sovereign and corporate clients.”

In her reaction to the two appointments, Dr Okonjo-Iweala who will be working out of Paris, Geneva and London said:

“I am excited to be embarking on this fresh journey. The two appointments will enable me to continue doing what I know best - rendering public service and using my financial and economist skills. I thank the international community for the recognition and continued support. I am also grateful for the prayers and support of many Nigerians”.