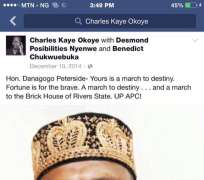 The Rivers State chapter of the Peoples Democratic Party, PDP says details about the true identity of Mr. Charles Kaye Okoye, who claimed to be a staff of the Independent National Electoral Commission have been uncovered.

Mr. Charles Okoye used by the Rivers State All Progressives Congress, APC as a witness at the Rivers State Governorship Election Tribunal sitting in Abuja has been confirmed as a card-carrying member of the APC and also on the pay roll of the former Governor of the State, Rotimi Amaechi.

The PDP observed that more communications and interactions with Mr. Charles Okoye on the social media, particularly his Facebook postings have further exposed his membership of the opposition Party (APC) in Rivers State and under the sponsorship of Amaechi to lie under oath.

The Party recalled that Charles Okoye was directly subpoenaed by the Rivers State APC and was at the Tribunal to tender a personally authored report, which he recanted during cross examination, adding that he played major roles in the APC campaigns for President Buhari and the defeated Rivers State APC Governorship candidate, Dakuku Peterside.

PDP wondered why someone who had earlier advised the APC candidate, Dakuku Peterside, having lost the election, to accept defeat and support Gov Wike, and also described the election as free and fair as the people of Rivers State have made their choice, will later dance a visibly misdirected steps.

In one of the series of postings on Facebook, Mr. Okoye had earlier admitted that he was available for rewards and bribes by the APC. His later posting on August 6, 2015, also indicated that the expected payment had been made, justifying the assignment by saying “Our Party Promises Nigerians change but the change we promised and which Nigerians desire so much cannot be achieved if we allow the resources that belong to all Nigerians to be misappropriated by a few”.

Mr Okoye went further in his posting on August 28, 2015, to praise his paymaster, former Governor Amaechi, alleging that he (Amaechi) would have been a dead man if Jonathan had won the election.

The PDP said although, it is aware that the so-called INEC staff, who was personally subpoenaed by the Rivers State APC to give questionable testimony on the Rivers governorship election, has already been disowned by the Commission (INEC) as a fraud, but that it is still important that the general public is made to know that he is under the sponsorship of the APC and was positioned in INEC to carry out dirty deals for Amaechi and the APC.

The PDP also reiterated that it is not bothered by the claims of Mr. Okoye at the Tribunal, believing that at the end of the day both the INEC compromised staff and the APC will hide their faces in shame, as justice will certainly prevail in the matter, in favour of the PDP.

PDP further called on the general public not to take any of the claims by the APC and its sponsored witnesses at the Tribunal seriously, as they are all lies and calculated efforts to truncate good governance in the State, which will fail woefully.