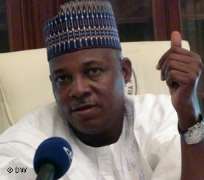 Governor Kashim Shettima of Borno State has pledged to provide all the necessary logistics and security to staff of the Transmission Company of Nigeria (TCN) to restore power supply to Maiduguri and its environs back to the national grid.

The Governor made the pledge when the General Manager Bauchi Region of the Transmission Company of Nigeria, Engineer Idris Lawan Ali led a delegation of PHCN management team to the Government House Maiduguri to solicit for support and cooperation of the state Government.

It could be recalled that Maiduguri and its environs has been in darkness since June 3rd 2015, as a result of windstorm shortly after it was reconnected, as well as vandalization by the Boko Haram insurgents more than six month ago.

He solicited the state government and the security agencies to assist them with vehicles and security cover in order to enable them reconnect the 132KVA line from Damboa to Biu.

Earlier, the leader of the delegation, Engr. Ali said they were at the Government House Maiduguri to solicit for assistance from the state government in their quest to restore power supply to the state.

He thanked Governor Kashim Shettima for finding time to receive them, despite his tight schedule and promised to work tirelessly to restore the power within one week.