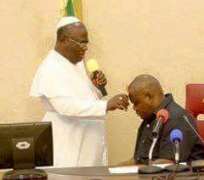 Since Governor Nyesom Wike has refused to publicly declare his assets in line with President Muhammadu Buhari's anti-corruption agenda, concerned members of the public have decided to do the needful on his behalf. Below is a synopsis of Wike's empire:

1. In 1998, Barr. E. N. Wike was living in one room in his father's house as a fresh Lawyer. He had no other property apart from the one room he lived in.

Those are the positions he has held so far and it is a known fact that he had no property before he entered public service. It is also a known fact that Wike has never worked in his entire life. Since becoming a public servant the following are properties he has acquired so far:

1. A luxury duplex at Asokoro Extention as private residence.

2. A two storey building with 6 apartments of 3 bed room flats at Asokoro Extension.

9. A Luxury shopping mall and Halls at Stadium Road.

13. The buildings opposite Presidential Hotel PH, formerly owned by CBN.

14. All D2D properties in Nigeria.
15. A property along Woji Road, after UBA with blue and red stucco board wall panels.

Now, pray, tell, where did Wike get the funds to acquire these luxurious assets from?