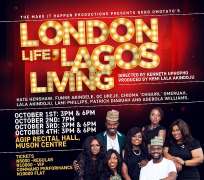 The Make it Happen Productions, one of the leading production companies in Nigeria is set to keep her audience on the edge of their seats with yet another extravaganza as it presents the stage adaptation of Bobo Omotayo’s “London Life, Lagos Living.”

“We have worked very hard to bring the production of Bobo Omotayo’s ‘London Life, Lagos Living’ alive on stage” said Kemi Lala Akindoju, CEO, The Make it Happen Productions. “Bobo Omotayo’s book captures the experiences of the Nigerian who lived in London and moves back home. The adaptation is hilarious and entertaining, we cannot wait for to have it on stage.” she concluded.

About Kemi Lala Akindoju
Kemi Lala Akindoju is a World Economic Forum Global Shaper, thespian, producer and drama teacher. The Youngest person to ever produce the international play V. Monologues Lala Akindoju cut her teeth as a stage actor appearing in over 70 productions since 2005. Lala is a talent scout who has created several new stars with her Open Mic Theatre and has professionally consulted for MTV, Ndani TV, amongst others in the area of talent. She has also consulted for several art projects with the British Council, the iRep film Festival, Woman rising festival amongst others. In 2010 she won the award for Actor of the Year at The Future Awards Africa and was recently selected for the International Visitors Leadership programme by the United States Public Affairs Section.