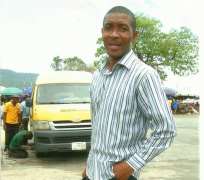 My attention has been drawn to an article written by my elder brother, Mr. Joe Igbokwe, which was published on-line by POINTBLANKNEWS.COM dated 25th August 2015, with the title, WANTED; MAXIMUM SECURITY FOR MR PRESIDENT AS CORRUPTION FIGHTS BACK (PLEASE GOOGLE). Joe Igbokwe is the Publicity Secretary of the ruling party, APC in Lagos State.

I have gone through the article and have been able to observe the following.

(1) Joe Igbokwe gave the impression that PDP is a native of South-East geopolitical zone of Nigeria.

(2) He gave us the impression that the South- East rejected General Mohammadu Buhari during the March 28, 2015 presidential election which Buhari eventually won.

(3) He gave the reading public the impression that his party (APC), and its members are not corrupt and criminally minded.

(4) He confirmed that the lopsided political appointments so far made by President Buhari, which excluded the South–East were deliberate.

(7) He gave Nigerians the impression that only President Buhari has the capacity to fight corruption.

I have taken time to outline Joe Igbokwe’s infantile and juvenile outbursts. For a man who is perhaps suffering from “infantilism”, I do not expect much from him. Otherwise, why must he be pointing one finger at corruption when his remaining four fingers are pointing at him and his party, on the same issue of corruption? Before I go further in this response or rejoinder, let me put it on record that I am not a member of PDP, neither am I a member of APC, APGA, Labour Party or indeed any political party. I was a foundation member of the PDP in 1998, and held various positions in Owerri Municipal (Imo State). Later, I joined ACN in 2010 and remained a member until its transformation to APC in 2013. I even contested for the House of Assembly election in 2011. As an Activist, writer and socio-political crusader, I decided in 2013 to be “party-less,” so as to be neutral in my activities, articles and viewpoints. However, I have greater affection for APC due to its progressive credentials.

Having laid the foundation of this piece, I will now treat Joe Igbokwe’s nonsensical article which aimed at portraying the South-East as an anti-Buhari and anti-government region.

(1) The PDP is a National political party with strong presence in all the six geo-political zones in this country. The party is not domiciled in the South-East alone. It rather has greater presence in the other five zones of South-West, South-South, North-Central, North-East and North-West than the South-East. Perhaps, a simple proof will prove me right. The presidential election result of March, 28, 2015 showed that the PDP votes in the South-East were the least, when compared to other zones. But the population of people in South East is higher than that in South-South and North- central. Conversely, this simply proved that the South-East zone rejected the PDP in the 2015 presidential election when compared to other zones.

(3) Joe Igbokwe, in his “ejaculatory” outburst labeled the PDP and its members as very corrupt while his party, the APC, and members are “St Jesus Christ” and without scars of corruption and “POTOPOTO”. Yes, corruption is a monster ravaging the socio- economic and political development and growth of this country. All hands must be on deck to fight, disgrace and expose corruption. As an anti-corruption crusader, I have fought corruption to a standstill. I have stripped corruption stark naked in my state (Imo), with clear evidences. I have been tried, tested and even tempted with public funds when I was in government. It is on record that I returned unspent funds cumulatively running into millions of naira on several occasions. I fought corruption to the extent that I looked my then boss (the immediate past Speaker of Imo State House of Assembly) eyeball to eyeball and told him, “You are very corrupt”. I went ahead and exposed his corrupt practices to EFCC, Force Headquarters, Presidency and to the global community. I have also exposed my State Governor and his cohorts for clear corrupt and criminal practices in Imo State. These people are APC members and leaders. Joe Igbokwe has all these information because his email address is in my mailing list. He reads me. So why must he label only PDP members as very corrupt people? Why must he play to the gallery? Why this very unnecessary showmanship and ‘’gra-gra’’.

(4) Joe Igbokwe, in his said article confirmed that the lopsided appointments so far made by President Buhari, which denied the people of South East of representation was deliberate. Igbokwe went ahead to ask in his article under reference, “How many votes did the Igbo give President Buhari? Did we not tell them that Jonathan will not win this election? Did they listen to us? Did they hear us? They abused and shouted us down. You cannot eat your cake and have it back. Please go to where you took your bath and pick your clothes. You political idiots………………….” That was Joe Igbokwe.

From the above vituperations, it is clear that Joe Igbokwe is now the attack dog of the ruling APC, brought out to attack, insult and incinerate South-East and Igbo political leaders and people. He now speaks and writes like a programmed robot. This is not how to be his party’s spokesperson. I have proved earlier that Igbos voted massively for President Buhari.

(5) Not only did Joe Igbokwe abuse, insult and denigrate Igbo leaders, he went ahead to throw stones at some of them. He threw stones at Chief (Dr) Engr. Emmanuel Iwuanyanwu, Professor Ben Nwabueze etc. for no just cause, other than they complained that the South East is being marginalized. Let me at this point ruthlessly warn Joe Igbokwe in clear terms, to not only match his brakes of insults but to also desist from insulting Igbo citizens and their leaders. If Chief Emmanuel Iwuanyanwu is corrupt and dirty, and Joe Igbokwe feels like exposing him to the world; then so be it. I hate corruption and corrupt leaders. But to abuse a personality such as Emmanuel Iwuanyanwu and other leaders in the South East for complaining about the marginalization of their people and zone, is the height of Joe Igbokwe’s insensitivity to the plight of the Igbos in the present government. Chief Emmanuel Iwuanyanwu is a Nationalist, a Philanthropist, a businessman, an industrialist, a politician, a statesman and above all, a man who has assisted many sons and daughters of Igboland into various positions of influence in the country. He deserves to be respected.

Let me therefore warn Igbokwe to be ready to face the consequences of his idiotic assault on Igbo leaders. As for his Godfather, Bola Tinubu, who is allegedly sponsoring him to abuse Igbo leaders, let me make it known that his complete dossier is in my data bank. Soon, very soon the atrocities of Bola Tinubu will be made public.

On issues of fighting corruption, President Buhari can only succeed if there are collaborative information from the 36 states and other Federal Government agencies and parastatals. If anti-corruption crusaders in this country decide to close their mouth and refuse to expose anything, believe me, President Buhari will only end up as a wasted “vegetable” in Aso-Rock without achieving results in this fight. Conversely, it is not only the President that needs security, according to Igbokwe; Anti-corruption crusaders needs serious security and protection, now that corruption is fighting back. As has been confirmed by Joe Igbokwe that corruption gained tap root in Nigeria in 1999, why then is President Buhari concentrating his probe on corruption and corrupt practices from 2010 to 2015? THIS IS INDEED FOOD FOR THOUGHT.

Finally, Joe Igbokwe will do well if he retraces his steps. Perhaps, he should try and trace his root back to his village in Anambra State, rather than the “run away” posture he has presently adopted. I believe he is hiding somewhere in Lagos State and completely ashamed of being addressed as an Igbo man.