Do Not Be Provoked To Retaliate No Matter What Radio Biafra Does; Protect Igbos 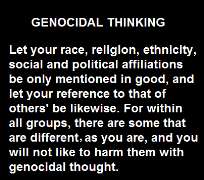 This is an important message especially to Hausas and Fulanis, the intended targets of Radio Biafra's plotted terror.

Do not be provoked, do not be tempted to retaliate. Leave it to the government and justice system to answer to harassment and murder of your people by Radio Biafra maniacs. Do not be played in the usual games that mischievous elements have plaid and used to provoke chaos over the years.

We have been following recent broadcasts from Nnamdi Kanu's Radio Biafra. The terror group has been apparently joyous since the events that led to about half a dozen deaths in Onitsha on Sunday 30th August. While the details of the events that led to the deaths are being investigated, the Nigerian Navy has denied it shot directly at protesting IPOB persons.

We have no idea if they were shot at, if they were injured and died as a result of a stampede when the navy fired into the air to disburse them after 'they had overrun a police post.' Or if certain unscrupulous Radio Biafra terrorists shot at their own people as many of their conversations have suggested they have the capacity to and as is common in world history.

The true details of Sunday the 30th will come out after the Buhari government concludes its investigation. However what we are aware of is a plan to terrorize Nigeria in reaction to the incidents and this plan by Radio Biafra is in full effect as several public conversations of the station have indicated.

Callers on Radio Biafra have been plotting to kill Hausas and Fulanis in Igbo states with intention to provoke a retaliation against innocent Igbos in other parts of Nigeria in hope of using this to "provoke chaos and drive Igbos home to Igbo-land."

These people supported Goodluck Jonathan and his army chief/thief Azubuike Ihejirika during their campaigns that led to the deaths of tyhousands of innocent Nigerians and now they are angry that a war is being waged against corruption and terror and Nigeria is finally in recovery and they are desperate to provoke trouble. We must not let them.

Chilling audio from the station can be listened to in these clips:

https://youtu.be/dM55jjM7n64
https://youtu..be/VcT-ZmjgPwQ
Do Not Attack Innocent Igbos; It Is A Wrong, Criminal And Sinful Reaction

We have read comments with promises to retaliate on innocent Igbos around Nigeria. We strongly reject such comments. No one must attack innocent people around him because some insane people have attacked other people elsewhere. This is not revenge or reprisals, it is further terror. Do not become a terrorist because others are terrorists. You will be arrested and you will go to hell. The innocent Igbos or others living with you deserve your protection. They are not implicated in the fanatical actions of Nnamdi Kanu and his Radio Biafra barbarians.

Please be patient and allow the law take control of the situation. We advise Nigerian police to be on the alert and arrest anyone in any part of Nigeria found involved in secret or open attacks, gang attacks and gang retributions. Any mob should be apprehended and duly sentenced. Justice must never be delivered by those who are not authorized.

In the past in our writings on "Genocidal Thinking" we have explained and backed with the following quote why one must never attack another innocent person of the "other" culture or ethnic group because some lowly people in the "other" ethnic group attacked people we associate with. We must always remember that we have no right to attack or otherwise harass innocent people. Muslims understand the Quran says as we quoted,

“…Let not the hatred of others to you make you swerve to wrong and depart from justice. Be just: that is next to piety: and fear God.” Quran 5 verse 8.

We call for 100% restraint on the part of all people who may soon be harassed, intimidated and killed by Radio Biafrans. Do Not Retaliate! Report to the authorities.

Radio Biafra is an enemy of Igbos and any actual cause for actualization of a "Biafra." They are vainglorious blood thirsty megalomaniacs and the scum of the earth. We encourage the urgent listing of the organisation as a terrorist organization and actions related.