1,081 WORDS FOR SENATOR SHEHU SANI ONLY REAL LEADERSHIP WILL DEVELOP THE NORTH. 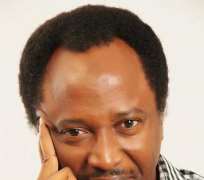 If Northern Nigeria would catch up with other regions of larger Nigeria, deliberate steps must be taken by the political class of that region to ensure that heavy investments are ploughed towards man power development and other indices which define development in real terms. A typical northerner thinks government is responsible for his/her livelihood as a result of which he or she must not be suffered to struggle and earn a life as is obtainable in the south. Prominent leaders of the North must find the courage required to change this mindset and teach their people that such mentality is far from reality. A government that is broke cannot sustain a “tradition” of conferring undue advantage on a region of the country over the others.

The North is backward by any standard yardstick used to measure development. In fact, it has been left behind by time. Though political power have been domiciled in that zone for over four decades, there’s very little or nothing to show in terms of tangible development. Besides some kilometers of good roads in a few locations, the north can safely be referred to as that region where nothing works. Healthcare system is zero. Education is almost haram. Nothing can be more re-assuring for a region that have been the hot bed of terrorist activities for over six years, as a deliberate attempt by immediate government to liberate it from the claws of violent crimes. There is so much work to be done in Northern Nigeria.

Senator Shehu Sani by his latest utterances seeks to drag Mallam Nasir El – Rufai into a needless media war. It is instructive to note that the Mallam appears to be the only material in the entire stock of the All Progressives’ Congress (at the governorship level) who comes across as someone that understands what governance is all about. While Adams Oshiomole takes pleasure in amusing Nigerians by castigating global citizens like Drs. Ngozi Okonjo – Iweala and Akinwunmi Adeshina, Rochas Anayo Okorocha has taken publicity stunts to another level. First was his historical handshake with a white president; next was a group photograph of some Nigerian governors and the UN Secretary General where he must have stood on a table to ensure he featured. Such is the stock of men we suddenly have as governors.

Mallam El – Rufai is a total break away from his contemporaries because He has given the business of governing a cosmopolitan state as Kaduna the seriousness it deserves. It is therefore surprising that a serving senator who should complement his effort from his height at the federal level is suddenly his serial attacker. Senator Sani’s outbursts are comical not because they sound funny but because they give him out as an individual who is a “power miss road”. How does one explain the governance concept of Sheep and Camels that have suddenly become a school of thought in Nigeria in this age of globalization and e-learning?

The senator strangely accuses his governor of operating administrative policies and programs which are elitist. While he says the governor must put in place palliative measures which would lift the poor from penury before anything else, he refuses to say the kind palliatives an average beggar have never seen but which has capacity to suddenly lift that beggar from his/her state of penury. Begging is lucrative. The people of Lagos will confirm this. It is probably the most lucrative business after winning an election and (maybe) opening a church. I therefore imagine that we may never have a situation in Nigeria where professional roadside beggars will voluntarily quit the trade. If they ever had such plans, the volume of assistance they receive in cash and/or kind (during peak periods – festive seasons and weekend) from kind Nigerians will have been better utilized.

Truth be told to the activist turn Senator. Only real leadership in the exact meaning of the word can develop the North. That is the kind of leadership his senior, Mallam El – Rufai have introduced since he was sworn in – a leadership that radical in its approach to solving problems while ensuring that only the right things are done. For a region and state that is one of the most backward in Nigeria, stakeholders should naturally yearn for a new system of leadership that will solve problems faced by society. This is the approach any right thinking Nigerian from the North (and elsewhere) should look forward to. The singular appointment of Jimi Lawal as senior special adviser on investments is pointer to the fact that the Mallam is aware that unless something is done urgently to improve the fortunes of the state, the cash crunch currently being faced will bite harder.

Another instance the Senator cited touched on the demolishing of illegal structures. According to him, the difference between Abuja and Kaduna properties is that while one may have been built by wealthy Nigerians with illicit funds, the other would most likely have been built with money paid to the owners as gratuity. While the senator may know Kaduna better, it would be nice of him to say why the master plan of a city should not be implemented or restored because some citizens built structures with monies they received as gratuity?

Having spent the last 3 years reading the works of Mohammed bin Rashid Al – Maktoum, my take on the war is simple. The Sheikh did not build Dubai by appealing to beggars to vacate their spots. He did not make Abu Dhabi the glory of the desert by pandering to Senators and/or citizens who did not share his vision. The Sheikh did not build an Oasis by pampering his fellow Arabs to accepting his vision for their regions. The 8th wonder of the world which I consider the UAE as wasn’t constructed by ordinary activism. I therefore recommend a copy of his book – My Vision to Senator Shehu Sani.

If nothing, that book if read and understood, will give him a clearer impression of what governance is about. It will teach him that the business of governance and leadership is beyond the trade of civil activism. It is beyond embarking on industrial actions or calling for civil disobedience. The challenges faced by Northern Nigeria are not one to be handled by begging or being mischievously soft on persons or groups who constitute clogs in the wheel of progress.

The choice is therefore in two folds!
Ezeani, Chukwunonso Elvis is an avid thinker, reader & researcher. He tweets @NonsoEzeani1