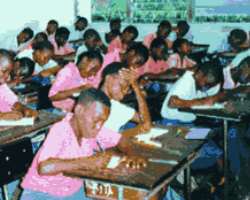 Deputy Chairman, Senate Committee on Education, Senator Abubakar Bagudu, did not mince words in describing the result of the 2009 November/December National Examination Council's SSCE as an embarrassment. His judgment was premised on the fast that 98 per cent of the candidates that sat for the examination failed woefully, a situation he attributed to the nation's ailing education sector.

Results released by NECO revealed that only 4,223 out of the 234,682 candidates who sat for the exams made five credits in five core subjects, the minimum requirement for admission into the nation's universities. According to the Professor Promise Okpala, only two per cent of the candidates passed the examination with five credits, including English and Mathematics. He also reported 236,613 cases of malpractice during the examination.

Bagudu is not the only person shocked by this dismal performance. In apparent expression of disaffection, the members of the National Association of Nigerian Students (NANS) staged a peaceful demonstration in Lagos on Thursday, March 18, calling on the government to save the education sector from total collapse.

A similar response also came last year when the House of Representatives mandated its committee on education to investigate the cause of mass failure in the West African Senior School Certificate Examination (WASSCE) and National Examination Council Senior School Certificate examinations. The mandate to probe the failure followed a motion by Hon. Umaru Kurfi and 17 others on 'WAEC and NECO failure rates and their impact on Nigeria's education future.' He said he was aware that the 2009 WAEC result released by its National Headquarters indicated that only 356,981 out of 1,373,009 candidates representing 25.99 per cent obtained five credits including English and Mathematics.

Also worried by the poor performance, the former Executive Secretary of the National Universities Commission, Professor Peter okebukola, blamed the teachers for not living up to expectation. He said: 'Many of the teachers are exceedingly weak in the subjects they teach students'.

A verbose exposition on this issue came from the Kwara State Commissioner for Education, Bolaji Abdullahi, who laid the blame on mass education introduced with the Universal Basic Education programme.

The Universal Basic Education (UBE) programme was launched in 1999 to provide compulsory and qualitative education at primary school and junior secondary school levels in the country. There is an increasing fear that it might become another recipe for system failure because of inadequate funding, poor infrastructure and insufficient qualified teachers.

Abdullahi took a cursory look at the policy and said: 'If we count backwards, we would find that majority of these children who failed this examination must have started school in the past 10 or 11 years, about the same time that the UBE was introduced in the country. Therefore, these ate the UBE children. They are the children who passed through a system that promoted them automatically from one class to another, whether they passed or not. The UBE did not want to leave any child behind, now we have ended up crippling all the children'.

He called for a review of the policy and focus more on quality rather than on mass education.

Abdullahi did not spare desperate parents who encourage their children to run crash programmes in school.

'I am talking of elite parents who want their children to advance quickly and become a doctor at 20 or 21. Is it not true that, especially for private schools, children now leave primary school in the fifth year and sit for the NECO or WASSCE in the fourth year of secondary education. The November/December examination that is meant for external candidates who want to remedy their previous results or who are not in schools have become dress rehearsal for children of desperate parents', he argued.

In her reaction, a teacher, Mrs Maureen Hussain-Adegbite, called for the scrapping of NECO. She said the result released by the board is unacceptable considering the fact that some of the students fared better in WAEC exams.

'Let NECO release the answer scripts to schools if they are sure of the results they released. Let an external body re-mark those scripts and you will discover the grave error NECO has committed. How can 98 per cent of the candidates fail an exam that even the candidates described as a 'walk over'', she said.

A public school teacher, who pleaded not to named, was visibly angry with the examination body (NECO) as she spoke, describing the results as fictitious. She urged the government to probe the results to ascertain the credibility of NECO examiners and the examination collating process.

Another parent, Thomas Echegi, who spoke with Daily Sun, said that the absence of facilities in public and some private schools also contribute to mass failure in exams. He said there is the need for the government to increase its allocation to the education sector, and set up monitoring teams to ensure that the disbursed funds to these institutions are properly utilized.

In her contribution, a teacher in Topgrade Secondary School, Surulere, Jane Okeke, said teachers are among the least remunerated professionals in the country.

According to her, many people have continued to lament the fallen standard of education without considering the fact that the government has failed to address the immediate problem while busy chasing shadows. She said some schools still owe teachers' salary for months, not minding the peanut.

'There should be an upward review of teachers' salary and an attractive term of service. Decade of negotiation for an enhanced package for teachers has not yielded any meaningful result. In the other parts of the world, for instance, in the United States Of America, the average salary for traditional public school teachers increased 4.5 percent in 2006- 2007 to $51,009, while Asia is always hiring TESL certified teachers with little experience to teach for mouth-watering offers!'

The President of the Academic Staff Union of Universities, Professor Ukachukwu Awuzie, advised the government to invest in human capital development.

He said that teachers would never be at their peak performance when their salaries are not paid and the required facilities are lacking.

'Any nation that fails to invest on human capital development cannot be talking about Vision 20 20:20,' he said.